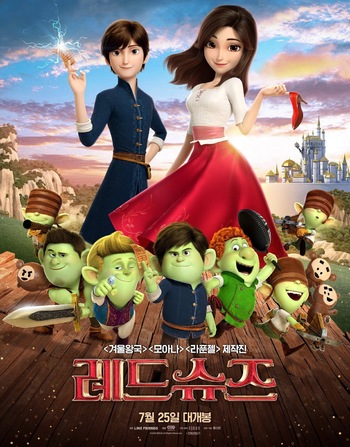 But when the shoes come off...
Advertisement:

Red Shoes and the Seven Dwarfs is a Korean CGI movie based on "Snow White" with a few twists: Snow White is a plus-sized princess, and magic red shoes cause her appearance to change, making her skinny, while the dwarves are actually a group of warriors who were cursed to become dwarfs whenever anyone looks at them.

Early in the movie, Snow White puts on red shoes and transforms into a skinnier, more conventionally attractive version of herself, and learns that if she takes the shoes off, she changes back. The dwarfs, meanwhile, are under a curse that can only be broken by the kiss of "the most beautiful woman in the land," who apparently is Snow White. The evil witch wants those red shoes back so she can have eternal youth. And Prince Average wants to improve his reputation by dating a beautiful woman - Snow White with the red shoes on!

Red Shoes and the Seven Dwarfs provides examples of: