Anime / The Tale of the Princess Kaguya 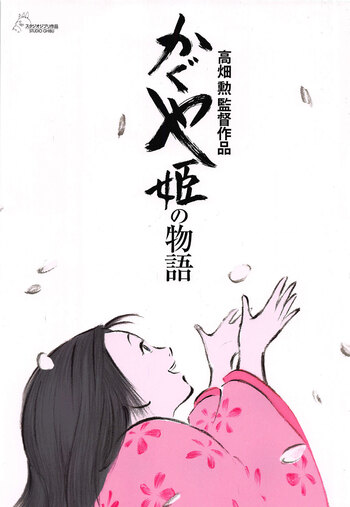 The Tale of the Princess Kaguya is a 2013 Japanese animation film from Studio Ghibli, directed by Isao Takahata, based on the 10th-century Japanese fairy tale The Tale of the Bamboo Cutter. Clocking in at 2 hours and 17 minutes, it stands as Ghibli's longest film ever released and one of the longest animated films in the world. It's also the longest animated movie to not be tied to a preexisting media franchise (assuming folk tales don't count as media franchises).

A bamboo cutter discovers a miniature girl in a bamboo shoot. He and his wife take her in, naming her "Princess Kaguya" and raising her to be a lady. As Kaguya grows in beauty, she also remembers her origins on the Moon, and is torn between returning there and her love for her life on Earth.

This was Takahata's last directorial work before his death in April 2018, though not the last project he was involved in (that being The Red Turtle in 2016, which he co-produced alongside Toshio Suzuki, Vincent Maraval, Pascal Caucheteux, and Grégoire Sorlat). It was dubbed and released in North America in 2014, and was nominated for the Academy Award for Best Animated Feature, a first for an anime film not directed by Hayao Miyazaki. It was also the first Ghibli film to be distributed on home video by Universal in North America. It also is currently the highest-budget anime film ever made, having a budget of $49 million (5 billion Yen)note more than twice the budget of the previous film to hold this distinction, Steamboy, which had a budget of $20 million (2.108 billion yen).

No relation to Kaguya-sama: Love Is War. The same Japanese folk tale that inspired this film was adapted back in 1987 as a live-action feature called Princess From the Moon.

The Tale of the Princess Kaguya provides examples of: