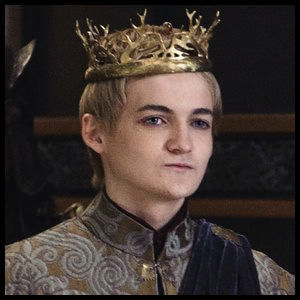 "The king can do as he likes!"

"We've had vicious kings, and we've had idiot kings, but I don't know if we've ever been cursed with a vicious idiot for a king!"
— Tyrion Lannister

The eldest son of King Robert Baratheon and Queen Cersei Lannister. Officially, at least. The truth is that Jaime Lannister, the queen's own twin brother, is his biological father, and also of his siblings. He is a spoiled, sadistic bully, who couldn't care less about the kingdom's problems and only thinks about his privileges. He becomes King of the Andals and the Rhoynar and the First Men, Lord of the Seven Kingdoms and Protector of the Realm after the death of Robert Baratheon. Impulsive and with low intelligence, even insulting and threatening his own allies, Joffrey orders the death of Ned Stark, and ends up destroying any chance of the conflict between the Lannisters and Starks ending peacefully. But Joffrey will soon find out that his actions have consequences that could end up turning against him...

Publically maiming a bard over a song is, if you'd believe it, one of LEAST cruel things this teenage king has done.

Example of:
The Caligula

Publically maiming a bard over a song is, if you'd believe it, one of LEAST cruel things this teenage king has done.