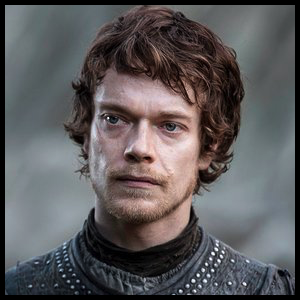 "You know what it's like to be told how lucky you are to be someone's prisoner? To be told how much YOU owe THEM?"
Click to see Reek. 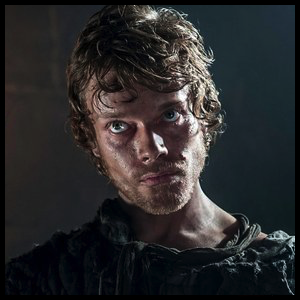 "I'm a Greyjoy. I can't fight for Robb and my father both."

The youngest son of Balon Greyjoy. He had two older brothers ("Maron" and "Rodrik" in the books), both slain at the Greyjoy's Rebellion, and an older sister, Yara. From the books... "Asha" in the books, but changed due to the One Steve Limit and the presence of the similarly-named Osha on the Starks' side; this was perhaps inevitable after Theon lampshaded it in a later book.

At the beginning of the series, Theon is the hostage and ward of Eddard Stark. Theon was technically a Stark hostage to guarantee his father Balon's good behavior. Due to his friendship with Robb Stark, his position in the Stark household became significantly more voluntary after Ned Stark's death. Theon betrayed the Starks, however, after Robb sent him to obtain Greyjoy support for the Starks in the War of the Five Kings, when Theon learned that his father intended to attack the North. Theon reluctantly sided with his father and joined the Greyjoy campaign, during which he managed to seize Winterfell with a handful of men. His seizure eventually failed when the Boltons (led by Ramsay Snow) besieged and retook Winterfell (allegedly on behalf of the Starks, though Ramsay actually sacked and burned Winterfell, which they blamed on Theon and the Ironborn), in the course of which Theon was captured.

After his capture by the Boltons, he has been extensively tortured by Ramsay Snow into adopting a second personality called Reek, serving as The Igor to Ramsay. Theon-Reek tells Ramsay and Roose that the two Stark Princes are Not Quite Dead, casting a Spanner in the Works of their plans to usurp the North. Nonetheless, Ramsay kept him as his personal pet and slave, appearing for all the world like one physical person is in fact two characters. Theon finally goes back to being himself when Sansa returns to Winterfell and becomes the new victim of Ramsay's abuse. Horrified by this and forced to confront all the mistakes he made in his past, Theon helps Sansa to escape Winterfell. After that, he does everything he can to help his sister Yara and repair the harm he has done to House Stark.