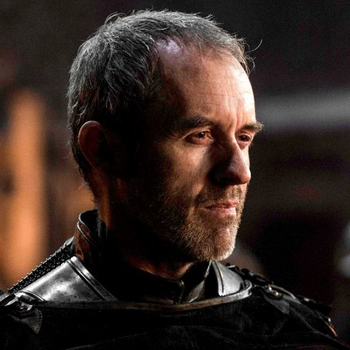 "It wasn't the Boltons defeated Stannis, but Stannis himself. I loved the man. He lifted me up and made me something. But he had demons in his skull whispering foul things."
— Davos

Middle brother between Robert and Renly and the Lord of Dragonstone. As Robert Baratheon died without legitimate issue, he is the rightful King of the Andals and the Rhoynar and the First Men, Lord of the Seven Kingdoms and Protector of the Realm. However, his throne has been usurped by the Baratheons of Kings Landing, bastards born of incest between Cersei and Ser Jaime Lannister, the Kingslayer. Upon receiving Lord Stark's information about the true parentage of King Joffrey, Stannis shares the secret with every lord in Westeros and presses his claim, and remained stubborn and defiant despite near-constant reversals and imminent defeat. Eventually, he responds to the summons of the Night's Watch and became the only King claimant to recognize the importance of the threat of the White Walkers. He was eventually defeated in Battle outside the walls of Winterfell by Ramsay Bolton.