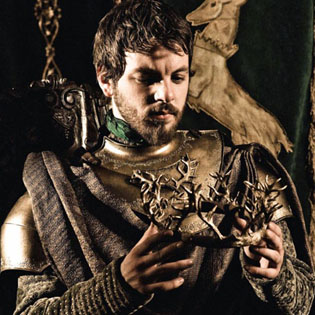 This is a Costume Trope (and specifically, a subtrope of Cool Crown) where someone with authority wears a crown or helmet made of (or made to resemble) an animal's horns. Typically the character is a royal, though warlords are fans of this fashion statement too, creating fearsome and garish horned helmets.

This is often an in-universe Invoked Trope, with characters trying to look similar to The Marvelous Deer, a Horned Humanoid or even a Beast Man. Just as often the horned animal in question is associated with authority or rulership by the wearer. As the page pic shows stags are often used, though bulls come a close second and basically any horned animal or mythical beast is fair game.

That said, demon-styled horns are a pretty big clue that the wearer is evil. Often there's an aversion where the horns are used as a sign of cuckoldry, which is traditionally represented by "putting the horns" on a man, or even literally growing horns in some plays.

Not to be confused with a "crown of thorns."