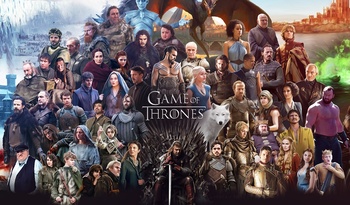 These are just a few of the many, many players in the Game of Thrones (George R. R. Martin not included).
Advertisement:

This page is specifically for the numerous characters appearing on the television series Game of Thrones. As the series spans numerous seasons, there may be unmarked spoilers. Characters are listed by the House that they serve as of the latest episode.

Be mindful of background information from the original books, which serves to illustrate connections to the source material or differences there-in. This information may not be canon to the television series unless confirmed by on-screen dialogue or Blu-ray extras, and the show may have taken a different course that invalidated it. Any such notes will be marked with "From the books..." as a labelnote.

The character sheet for the books is here. Tropes specific to the books should go there; keep in mind there are 15 times more characters there.

Due to being set in a distant era, the prequel series House of the Dragon has its own page.

Beware spoilers if you're not up to date on the episodes.

Organizations, Commoners, and Others