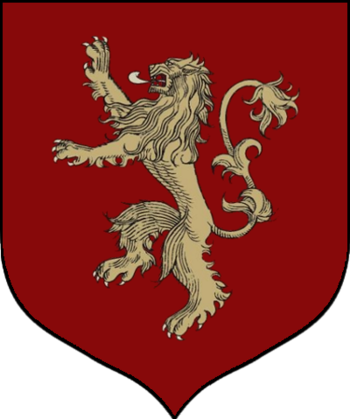 "Hear Me Roar!"
"A Lannister always pays his debts."

House Lannister of Casterly Rock is renowned across Westeros and all of the known world as the wealthiest and most powerful single family in the Seven Kingdoms. They are also the real power behind the Iron Throne, despite the throne nominally being occupied by House Baratheon of King's Landing. Its lord has the title of Warden of the West, Lord Paramount of the Westerlands, and Lord of Casterly Rock. 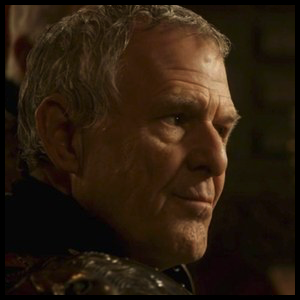 "I did not return to the capital to serve as your puppet."

"Both Baratheon brothers have taken up against us. Jaime captured, his armies scattered...it's a catastrophe."

Lord Tywin's younger brother and second in command. Uncle to Cersei, Jaime, and Tyrion, and father to Lancel, Martyn, and Willem Lannister.

See The Faith of the Seven.

The younger sons of Ser Kevan Lannister. Taken hostage by the Northern armies and held at Riverrun. 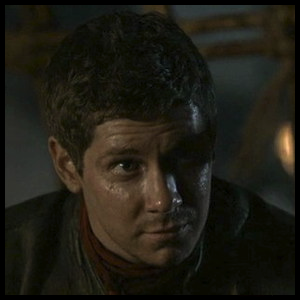 "I'll remember it all, until I die. That was the best day of my life."

Another cousin to the main three, captured by Robb Stark and used as a negotiator.

Cersei Lannister: You've always been funny. But none of your jokes will ever match the first one, will they? You remember? Back when you ripped my mother open on your way out of her and she bled to death?
Tyrion Lannister: ...She was my mother, too.

The wife of Tywin Lannister and the mother of Cersei, Jaime, and Tyrion. She died giving birth to Tyrion before the beginning of the series.

"He was a good man. But a weak man... a weak man who nearly destroyed our House and name."
— Tywin Lannister

The late father of Tywin and Kevan Lannister. He was a kind and generous lord, but his time as the head of the Lannisters was a period marked by decline for the House due to several poor investments, which nearly bankrupted the family. He also allowed himself to be openly mocked at court, which eventually resulted in the rebellion of the vassal House Reyne of Castamere and Tywin's rise to infamy as he personally put down the rebellion in his father's place, completely eradicating House Reyne in the process.

"We've worked through the night, my lord. Perhaps we'd profit from some sleep."

An officer in the army of House Lannister. He is a distant relative of Lord Tywin and is sent home to the Westerlands for insubordination.

"It filled me with dread. Piles and piles of them, years and years of them. How many countless living, crawling things smashed and dried out and returned to the dirt? In my dreams I found myself standing on a beach filled with beetle husks, stretching as far as the eye could see. I woke up crying, weeping for their shattered little bodies."
— Tyrion Lannister

A deceased cousin of Jaime, Tyrion and Cersei, who was brain-damaged from infancy.

"Using some vile sorcery, your brother fell on Stafford Lannister with an army of wolves. Thousands of good men were butchered."
— Lancel

An officer of House Lannister, and one of Tywin's many cousins. Killed at the Battle of Oxcross by the Northmen.