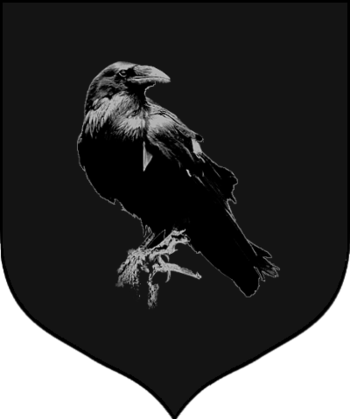 "Night gathers, and now my watch begins. It shall not end until my death. I shall take no wife, hold no lands, father no children. I shall wear no crowns and win no glory. I shall live and die at my post. I am the sword in the darkness. I am the watcher on the walls. I am the fire that burns against the cold, the light that brings the dawn, the horn that wakes the sleepers, the shield that guards the realms of men. I pledge my life and honor to the Night's Watch, for this night and all the nights to come."

The Night’s Watch is a sworn brotherhood of warriors tasked with defending a giant wall of ice against supernatural and unknown threats beyond the Wall. It is described by the series' show-runners as a cross between an ancient monastic order and a special forces brigade. It was once considered a noble calling by the entire realm but now, it is only considered a noble and honorable calling by those in the North, from where many second sons or highborn illegitimate sons of Northern noble houses voluntarily join for the sake of honor and duty. Because the army-of-the-dead threat is considered to be long gone, most realms don’t hold it in high esteem anymore and nowadays — in addition to the few nobles and noble-born bastard sons who voluntarily join — it is also manned by individuals who were once criminals, fugitives, and disgraced ex-knights. Any man joining the Night's Watch is given amnesty for all his previous crimes and is beyond the reach of the Kings of Westeros. At the beginning of the series, the Others are shown to have returned. 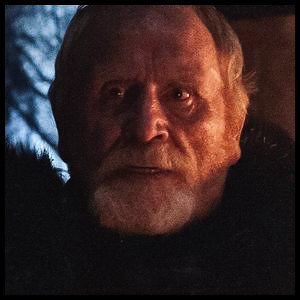 "You want to lead one day? Then learn how to follow."

"A man of the Night's Watch lives his life for the realm."

997th Lord Commander of the Night's Watch. Killed by one of his own men during a coup. 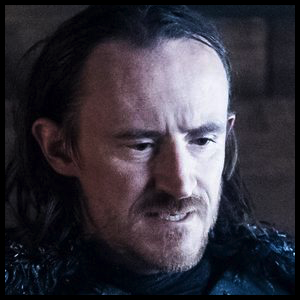 "If the Gods wanted us to have dignity, they wouldn't make us fart when we died."

Acting Lord Commander of the Night's Watch. Part of the group Commander Mormont leads beyond the Wall, who has a cynical wisecrack for any situation.

Maester serving as a member of the Night's Watch. Extremely old, blind, and awesome. When most of the Night's Watch's commanding officers get killed off in the expedition beyond the Wall, Maester Aemon steps up to help lead the remaining garrison, while supporting Alliser Thorne's position as Acting Lord Commander until a new election can be held (a maester can't be a Lord Commander). See The Order of the Maesters. 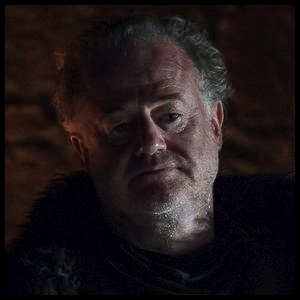 "You don't know cold. Neither of you do."

"When you're out there, beyond the Wall with the sun going down, do you want a man at your back? Or a sniveling boy?"

The Master-at-Arms and later First Ranger of Castle Black. Thorne is tasked with the training of the new recruits. He is also formally Acting Lord Commander in Mormont's absence and after Mormont's death, both Thorne and Maester Aemon hold power before a new Lord Commander is elected. He leads the defense of Castle Black against Mance Rayder's wildling horde.

Eddard Stark's younger brother and First Ranger of the Night's Watch. He went missing on a ranging north of the Wall, prompting an expedition to investigate his fate, which has been left a mystery.

The First Builder; a senior position within the Night's Watch.

The First Steward of the Night's Watch. 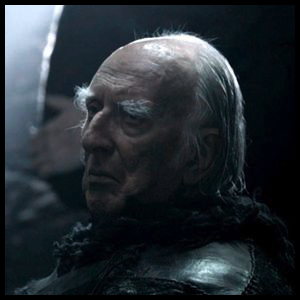 "Ser Denys Mallister joined the Watch as a boy and has served loyally longer than any other Ranger. Through ten winters he served. As Commander of the Shadow Tower he kept the wildlings away. We could do no better."

Ser Denys Mallister is the commander of the Shadow Tower, located at the western end of the Wall, one of only three major castles along it still manned by the Night's Watch (the other two being Castle Black in the center, and Eastwatch at the eastern coast).

Former Steward of the Night's Watch, later dispatched by Lord Commander Jon Snow to the Citadel in the hopes of becoming the Maester to replace Maester Aemon. See The Order of the Maesters. 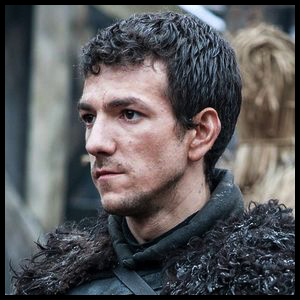 "I don't think I can kill a hundred wildlings."

A recruit at the Wall; one of Jon's friends. He is assigned to the Stewards after completing training. 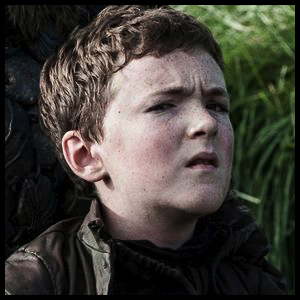 "I was the best archer in our hamlet."

A young boy who is the lone survivor of a small village in the Gift razed by wildlings. 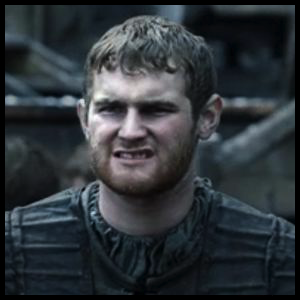 "When people talk about the Night's Watch, they never mention the shoveling."

A recruit at the Wall and also in Jon's friend group. He is assigned to the Rangers after completing training. 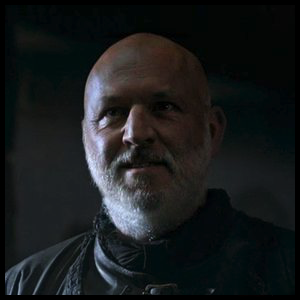 "I commanded the City Watch of King's Landing, boy."

Janos Slynt: Are you drunk? I won't have my honor questioned by an imp!
Tyrion Lannister: I'm not questioning your honor, Lord Janos. I'm denying its existence.

Commander of the City Watch in King's Landing at the beginning of the series, he is named Lord of Harrenhal and becomes the founder of House Slynt for his service to King Joffrey Baratheon and the betrayal and arrest of Ned Stark. He is exiled to the Night's Watch by the acting Hand of the King, Tyrion Lannister, for his part in the massacre of King Robert Baratheon's bastard children. He will not let you forget that he commanded the City Watch of King's Landing. 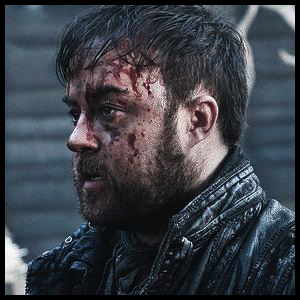 "If we want to live, we'll have to look after ourselves."

"Run fast, Piggy! And sleep well! I'll be cutting your throat one of these nights."

Another recruit at the Wall. Unlike Pyp and Grenn, he's not one of Jon's friends. He is assigned to the Rangers after completing training. 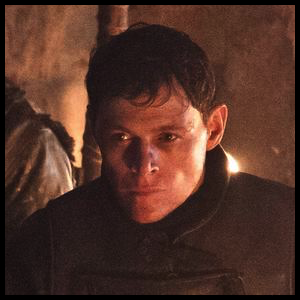 "I was a fucking legend in Gin Alley. A fucking LEGEND!"

A brother of the Night's Watch who led a mutiny which claimed the life of Lord Commander Mormont. Karl has since taken over Craster's Keep. 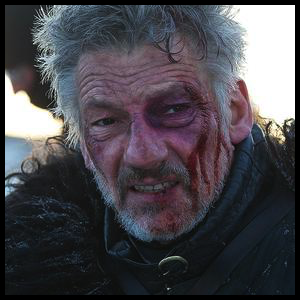 "I've been called a lot of things, but that's probably my first 'Lord Qhorin'."

"We are at war. We've always been at war. It's never going to end 'cause we're not fighting an enemy. We're fighting the North and it's not going anywhere."

A legendary ranger of the Night's Watch, based at the Shadow Tower.

"I know I broke my oath. I know I'm a deserter. I should have gone back to the Wall and warned them, but I saw what I saw. I saw the White Walkers."

A ranger who sees the White Walkers while on a ranging party. Later executed by Eddard Stark for desertion.

"If you want to run away south, run away. Of course, they'll behead you as a deserter, if I don't catch you first."

A young ranger, and third son of House Royce of Runestone. He leads Will's ranging party beyond the Wall, and is one of the first victims of the White Walkers.

"Our orders were to track the Wildlings. We tracked them. They won't bother us no more."

A senior ranger, and the third member of Will's Wildling party. Killed by the White Walkers in the forest.

A ranger under Qhorin Halfhand's command. 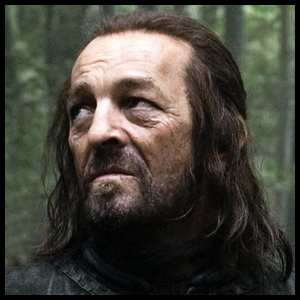 "Come on, you sorry sons of whores! It's a thousand leagues to the Wall, and winter is coming!"

"It's a funny thing; people worry so much about their throats that they forget about what's down low."

A sworn brother of the Night's Watch, in which he serves as a recruiter.