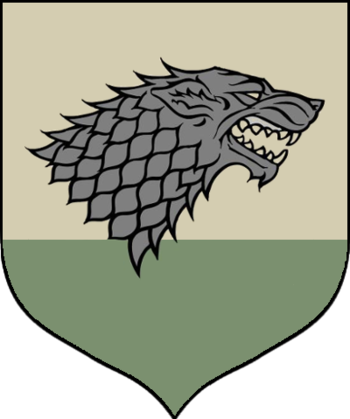 "Winter Is Coming."
"You Starks are hard to kill."
— Jon Snow

One of the oldest the Great Houses of Westeros, very big on honor and tradition. Once, the Starks were Kings in the North and the Kings of Winter, but after Aegon's conquest and the reformation of the Seven Kingdoms of Westeros, the Starks' rank was reduced to Wardens of the North. The old titles are revived following the execution of Ned Stark and his son's acclamation as King. In the aftermath of the Red Wedding, House Stark was believed to be extinguished with Robb Stark and his family being murdered (though some of his siblings still survive), with their lands, titles and seat of power handed over to House Bolton. After the Second Battle of Winterfell, House Bolton is destroyed and the Starks are restored to power with Jon Snow as the new King in the North.

For tropes related to the younger generation of the Starks, see House Stark Children. 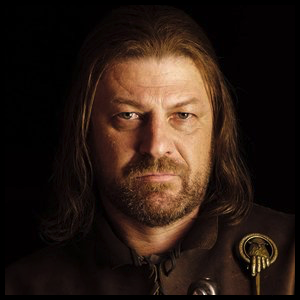 "The man who passes the sentence should swing the sword."
Click here 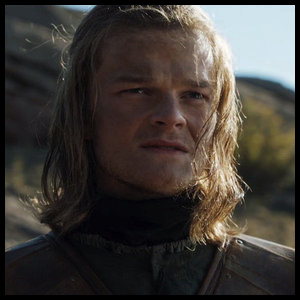 to see the Rebellion-era Ned Stark.

"I grew up with soldiers. I learned how to die a long time ago."

Eddard "Ned" Stark, Lord of Winterfell and Warden of the North, becomes the Hand of the King after Lord Jon Arryn's death. He is known for his sense of honor and justice. He took part in Robert's Rebellion after his sister Lyanna was kidnapped by Crown Prince Rhaegar Targaryen. When Ned's father and brother went south to reclaim her, the "Mad King" Aerys Targaryen burned both of them alive. Ned and Robert Baratheon led the rebellion to unseat him from the throne. As the show opens, Ned has been content to remain in the north, but after the death of Lord Jon Arryn, he is convinced that it is his duty to accept the position of Hand of the King. Ned is not interested in politics, and prefers to rule with honor and follow the law. 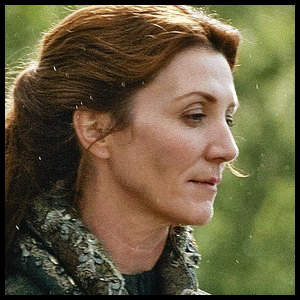 "...all this horror that's come to my family... it's all because I couldn't love a motherless child."

"You have inherited your father's responsibilities. I am afraid they come at a cost."

Catelyn Stark, Lady of Winterfell, is the wife of Lord Eddard Stark. Born to the Lord and Lady of the Riverlands, she is the elder sister of Lysa Arryn, Lady of the Vale and Mistress of the Eyrie. Murdered at her brother Edmure's Red Wedding to Roslin Frey at the Twins by the Boltons and Freys. 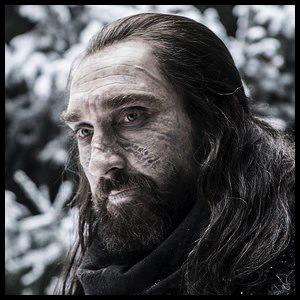 Eddard Stark's younger brother and First Ranger of the Night's Watch. He is uncle to Robb, Jon, Sansa, Arya, Bran and Rickon. Benjen went missing on a ranging north of the Wall, prompting an expedition to investigate his fate. It is later discovered he engaged the White Walkers and was saved by the Children of the Forest, who transformed him into a pseudo-wight being. In this form, Benjen aids Bran and Meera Reed in their travels in the north. 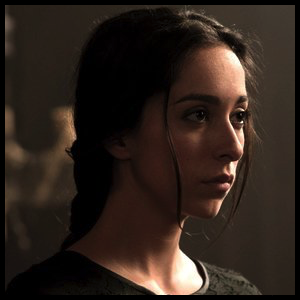 "I decided I would not waste my years planning dances and masquerades with the other noble ladies."

"May I speak my mind, your Grace? [...] I think you lost this war the day you married her."
— Rickard Karstark

A noblewoman from the Free City of Volantis in Essos. Fed up with slave culture and pointless upper-class ritual, she came to Westeros and found herself working as a medic in the Westerlands, treating Stark, Tully, and Lannister wounded. In the aftermath of the Starks' greatest victory at Oxcross, she met Robb Stark, and they eventually fell in love and married, breaking Robb's vow to marry one of Walder Frey's granddaughters. She replaced the original character Jeyne Westerling from the books.

The Prior Generation of House Stark 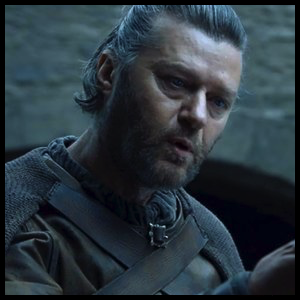 "Remember that you are a Stark. Comport yourself with dignity at the Vale and try to stay out of fights. But if you have to fight, win."

Father of Brandon, Eddard, Lyanna and Benjen Stark, Rickard was the Lord of Winterfell, the Warden of the North and head of House Stark until he was killed by the Mad King. 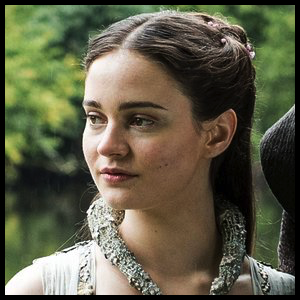 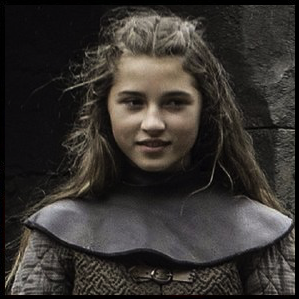 to see Lyanna as a child.

"You want to know the horrible truth? I can't even remember what she (Lyanna) looked like. I only know she was the one thing I ever wanted. Someone took her away from me, and seven kingdoms couldn't fill the hole she left behind."
— Robert Baratheon

Eddard Stark's sister and Robert's betrothed. She was supposedly kidnapped by Rhaegar Targaryen, which ignited Robert's Rebellion but no one really knows if she was actually kidnapped or if she was in love with Rhaegar and ran away with him. She died seventeen years prior to the start of the series. (See the character sheets on the original books for more details.) It turns out that she is the mother of Jon Snow, whom she had with Rhaegar Targaryen, her husband. 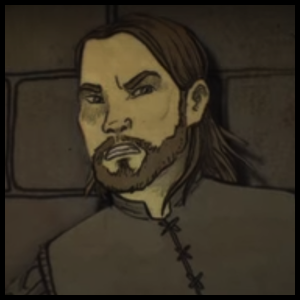 "I was her (Catelyn's) little confidante. Her plaything. She could tell me anything, anything at all. She told me about all the horses that she liked, the castle that she wanted to live in, the man she wanted to marry. A Northerner, with a jaw like an anvil. So I challenged him to a duel. I mean, why not? I'd read all the stories. The little hero always beats the big villain in all the stories. In the end, she wouldn't even let him kill me. 'He's just a boy,' she said, 'please don't hurt him.' So, he gave me a nice little scar to remember him by and off they went."
— Petyr Baelish

Ned, Benjen, and Lyanna's eldest brother and former heir to Winterfell. Killed himself trying to save his father from roasting in a ludicrous mockery of a trial by combat.