Characters / A Song of Ice and Fire - House Stark

This is a listing of members of House Stark in A Song of Ice and Fire. 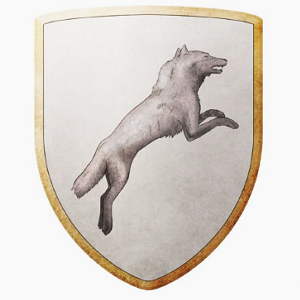 The Great House ruling the North, the largest but most sparsely populated territory of the Seven Kingdoms, and the lands most vulnerable to Westeros's long winters, which last for years at a time. They are a grim house of iron will, holding to the old laws and customs of the First Men, being the only Great House that does so. They trace their ancestry from a legendary fellow named Bran the Builder, who helped raise the Wall as well as Winterfell itself, and almost every generation of Starks has had a "Brandon" amongst their ranks. The Starks ruled as the Kings of Winter until Aegon's Conquest, when Torrhen Stark saw wisdom (or perhaps the hopelessness of resistance) and bent the knee. For this he became known as "The King Who Knelt," but the North was one of the only kingdoms not to be ravaged by the war. Their sigil is a gray direwolf, (a large species of wolf that is no longer seen south of the Wall) on a white/silver field.

Due to their prominence in the story, accounting to six POV characters and 162 chapters of 348 total in the series (up to A Dance With Dragons), House Stark are the most prominently featured noble house in the books and are the de-facto protagonists of A Song of Ice and Fire. 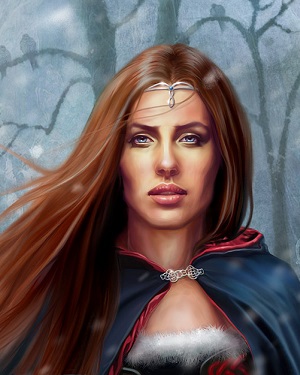 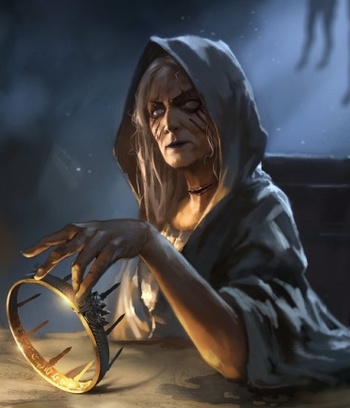 "How can I do my duty when I do not know where it lies?"

Wife of Eddard Stark, originally from the House Tully and above all devoted to her father, brother, husband and children. After Jon Arryn dies, she receives a letter from her sister Lysa, Jon Arryn's widow, who blames the Lannisters for Arryn's death. While her husband joins the royal court, she stays in Winterfell in order to protect her children, but is later forced to travel south to investigate the attempt on Bran's life and advise Robb in the War of the Five Kings.

For the Brotherhood Without Banners character page, see here.

Eddard's younger brother and uncle to Robb, Jon, Sansa, Arya, Bran and Rickon. He is First Ranger in the Night's Watch.

King Robb Stark, the King in the North and King of the Trident, Lord of Winterfell

The Young Wolf, The King Who Lost The North 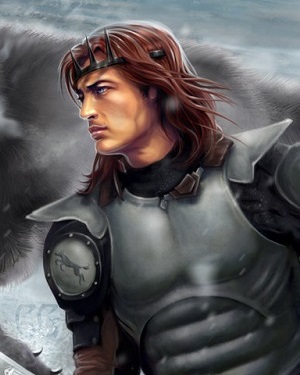 "I have won every battle, and yet I feel like I'm losing the war."
"Gods be good, why would any man ever want to be king? When everyone was shouting King in the North, King in the North, I told myself… swore to myself… that I would be a good king, as honorable as Father, strong, just, loyal to my friends and brave when I faced my enemies… now I can’t even tell one from the other. How did it all get so confused?"

Eddard's oldest son and heir, fourteen turning fifteen at the beginning of the series. While young, he proves to be a bold and promising ruler when his father leaves to join the King's court. He is loyal to his father's people and shares his father's commitment to honor above all. He and Rickon are the only Stark children that do not serve as POV characters. Becomes King in the North and of the Trident after his father's death and the beginning of the War of the Five Kings.

His direwolf is Grey Wind, named for his speed and smoky gray fur. 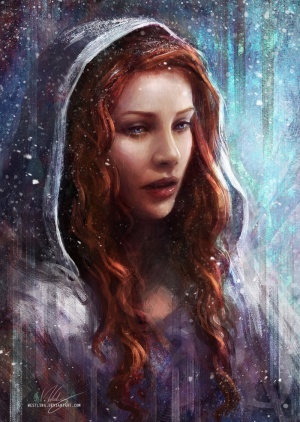 "My skin has turned to porcelain, to ivory, to steel."

Eddard's oldest daughter. She is an optimistic and innocent eleven-year-old girl during the beginning of the series, originally set to become the next queen. Her main flaw is that she is very naïve, often thinking that the harsh world around her works like it does in romantic fairytales. Ouch. Needless to say, certain events change that. She seems to be becoming more savvy, cynical and manipulative, with the help of Littlefinger.

Her direwolf is Lady, the smallest and sweetest of the litter. 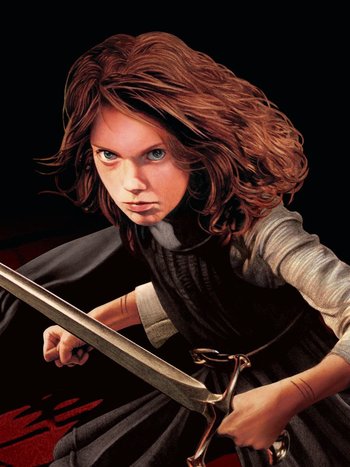 Eddard's free-spirited, nine-year-old tomboy daughter who doesn't fit the expectations of a highborn girl at all. She identifies with her brother Jon, a fellow outsider, with who she is very close, and enjoys the company of those from lower classes, such as servants and their children. When the war breaks out, Arya plunges into the wide world as she is forced to go on the run and becomes embroiled in a surprising number of violent adventures despite her tender age.

Her direwolf is Nymeria. 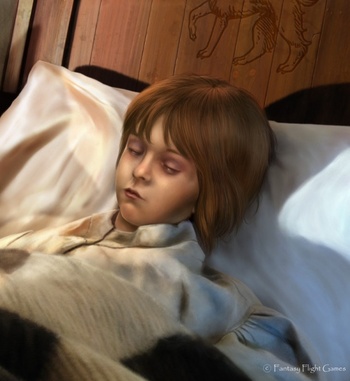 "A thousand eyes, a hundred skins, wisdom deep as the roots of ancient trees. A greenseer."

Eddard Stark's kind and gentle eight-year-old son who dreams of being a knight and loves to climb and explore, until Jaime Lannister pushes him out a window and he becomes crippled from the fall. While in a coma, he has a dream of a three-eyed crow that gives him prophetic visions as well as magical abilities to take control of his pet wolf, Summer. 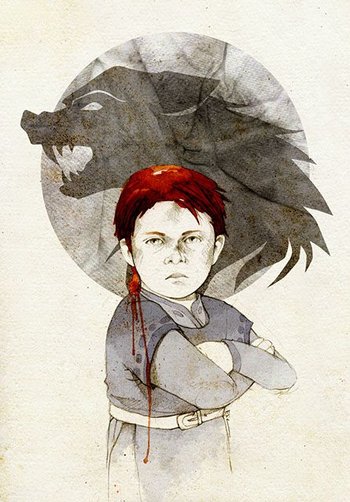 The youngest Stark, a spirited and energetic four-year-old boy. Over the course of the story, he grows scared and violent when his world disintegrates around him. His pet wolf, Shaggydog, is unique among the direwolves for being completely black and unusually savage.

Lord Eddard's fourteen-year-old illegitimate son. Like his uncle Benjen Stark and many Starks before him, Jon joins the Night's Watch and is eventually elected Lord Commander. His direwolf is Ghost, white and silent.