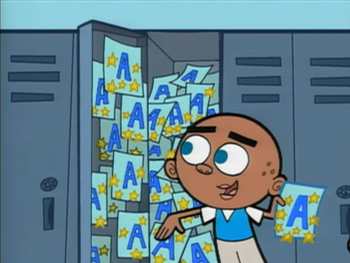 A character is shown as getting really good grades in school, and being all around academically competent.

Often it's a way to quickly establish them as so intelligent in general that they are able to master the academia without effort. Other times, it's more to showcase their diligence, at studying in particular. Either way, kids need role models.

When more than one character who is Book Smart is at the same school, a competition of who gets the best test scores is pretty much inevitable.

Almost always seen in family shows, which usually feature at least one book smart sibling with a Book Dumb sibling as a foil, typically in Foolish Sibling, Responsible Sibling and The Glorious War of Sisterly Rivalry dynamics.

In common parlance, the phrase "book smart" tends to imply that a person is sheltered or lacking in street smarts. That can be the case with characters to whom this trope applies, but it isn't a prerequisite.