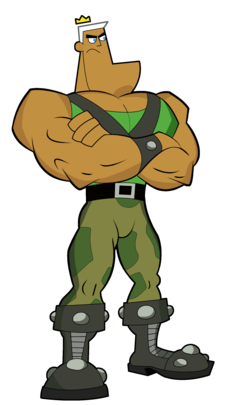 These boots were made for walking...all over you.
Advertisement:

Like other articles of clothing, a character's footwear can speak volumes about what the audience can or shouldn't expect from them. When the character is wearing good solid boots, it's usually a safe bet that they aren't going to turn out to be a pushover or a wimp. These are Boots of Toughness: boots used to signify that the character is tough. The boots themselves don't have to be tough; they may be battered, damaged, mended or even almost completely worn out. What they do have to be is Substantial, Sturdy, and Practical.

Let's take those one by one:

Boots of Toughness often figure in a Feet-First Introduction.