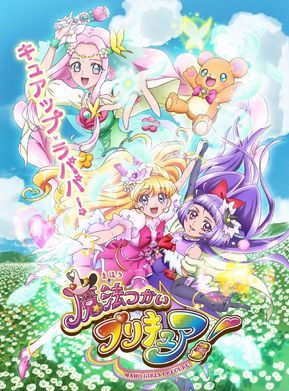 Maho Girls PreCure (Mahoutsukai Pretty Cure; "Magician Pretty Cure", known as Witchy Pretty Cure on the Toei Animation US webpage), is the thirteenth entry in the Pretty Cure franchise. It is the eleventh separate continuity in the series and began airing in February 2016.

One day, junior-high student Mirai Asahina spots a mysterious girl flying through the sky on a broom and discovers there is an entire world of magic and wonder existing parallel to Earth. The stranger, a novice witch named Riko, has crossed over to this world in search of the "Linkle Stone Emerald", and the two girls realize they somehow possess identical pendants.

When they are suddenly attacked by a minion of the Dark Sorcerer Dokurokushe, their pendants shine with a blessed light and grant them incredible magical power. Now Mirai and Riko must study and fight together as both magicians and warriors: the Maho Girls Pretty Cure, Cure Miracle and Cure Magical! Mid-way through the series, they are joined by new Cure, Cure Felice.

The show marks the return to some earlier Precure conventions, such as the Wonder Twin Powers and the color contrast.