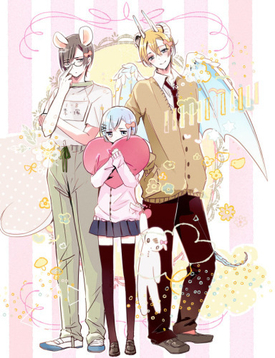 When she travels in snow-covered forest, Mika and her lantern, Lumiere, find a girl named Karen. They travel together and then find a small church in a middle of the forest. A sister welcomes them, and offers them a place to stay. In there, Karen tells them about rumours of "Heartless Boundary Witch".

That night, Mika wakes from her bed, to find out....

That the nun is a criminal aiming to rob them, and has already killed Karen. Then she stabs Mika....

Only to find out that Mika is the rumored "Heartless Boundary Witch". Heartless, in terms that "Her sister stole her literal heart and she's out to get it back... for about 500 years."

Oh, and she's a witch. Which means that the con didn't really work out....

And that's for the first chapter.

Majo no Shinzou (Witch's Heart in English) is a Gaslamp Fantasy about a witch who's tirelessly seeking her heart, and her impact upon people she meets. Created by Matoba, it was serialized in Gangan Online from 2012 to 2016.