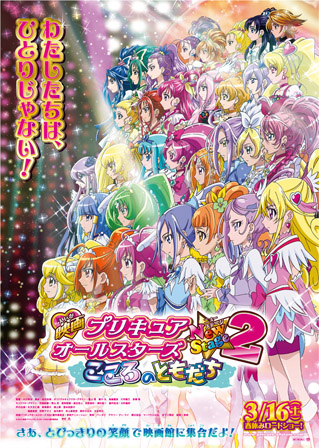 Thought one group of Cures was good? How about all of them?
Advertisement:

Pretty Cure All Stars is a series of crossover movies that teams up all of the Pretty Cure teams. Each film features Cures from all continuities joining forces to combat a new powerful foe, with focus given to the teams from the currently-airing season and the recently-ended one.

The first three movies (DX, DX2, and DX3) follow a very simple formula: the current generation of Pretty Cure (Fresh, HeartCatch and Suite, respectively) encounter a new Big Bad who is seeking a MacGuffin to destroy the world, and resurrects a team of bad guys from previous series to help him. The current Pretty Cure team up with the previous generations of Pretty Cure to kick ass, with the finale involving the use of "Miracle Lights" (a fourth-wall-breaking toy that the kids in the audience are encouraged to wave at this point) to power up the Pretty Cure enough to save the day.

New Stage: Friends of the Future, the fourth movie, marks the start of the New Stage trilogy. Following the return and subsequent defeat of Fusion from the first movie by the teams up to Suite, the Pretty Cure have become popular heroes and icons in Yokohama. One such fan is Ayumi Sakagami, a shy and lonely middle-school girl who secretly wishes that she could become a Pretty Cure as well. Unfortunately, Fusion is preparing to revive itself once more, and Ayumi finds herself caught in the crossfire after she befriends a mysterious yellow blob she names, "Fuu-chan".

The fifth movie, New Stage 2: Friends of the Heart, introduces two new fairies as the focus characters. As for the heroines themselves, they're invited to another world, seemingly as the guests of honor for a "Pretty Cure Party" at a school for fairies. However, it's actually a trap by a mysterious creature whose main goal is to steal away their Transformation Trinkets.

The sixth movie, New Stage 3: Friends of Eternity celebrated the 10th Anniversary of the Pretty Cure franchise. When children begin suddenly begin not waking up, the Pretty Cure step in to find out what's going on, leading them to discover the troubled dream fairy Yumeta and his mother, whose seeking to make her son happy by keeping the children in the Land of Dreams.

A seventh movie, Pretty Cure All Stars: Spring Carnival♪ is the first standalone All Stars movie not part of a trilogy. The Cures are invited by the kingdom of Harmonia to participate in their Spring Carnival, not knowing the entire kingdom is in the hands of a Phantom Thief and his crony.

The eighth movie, Everyone Sing♪ Miraculous Magic celebrates the 20th Pretty Cure movie. A new threat seeks the tears of the 42 Pretty Cure (the 41 TV heroines plus Cure Echo), which has the power to destroy the world.

On October 29th, 2016, it was revealed that the movie series would be retroactively expanded as Pretty Cure Stars, a crossover series with similar premise but with a more compact cast, involving only the current season and the two seasons before, much like the Super Sentai VS. movies. The first of these new movies was Pretty Cure Dream Stars!, in which a lonely girl named Sakura flees from a threat in her world in search of the Pretty Cures of Keys, Jewels, and Sweets to rescue her captured friend Shizuka.

The tenth Stars movie, Pretty Cure Super Stars!, teams up the Pretty Cures of the Maho Girls, KiraKira, and HuGtto! teams. A mysterious figure who Hana met as a child seeks restitution for an unfulfilled promise she made to him in the past.

In an oddball addition, The Movie for HuGtto is one of these, entitled HUGtto! PreCure ♥ Futari wa PreCure: All-Stars Memories, in which the HuGtto team teams up with Cure Black and White to rescue the other teams from a villain who has kidnapped them, stole their memories, and turned them into adorable little babies. As well, episodes 36 and 37 of HuGtto marks the first in-series Pretty Cure All-Stars event and makes all movies officially canon.

The 2019 installment of the franchise is Pretty Cure Miracle Universe, in which the KiraKira, HuGtto!, and the brand new Star★Twinkle Pretty Cure team discover the origins of the Miracle Lights.

The 2020 installment is titled Pretty Cure Miracle Leap: A Strange Day with Everyone. In it, a spirit named Miraclun who can create Miraclun Lights is pursued by a spirit named Refrain, and it’s up to the casts of HuGtto!, Star☆Twinkle, and the new Healin’ Good♡Pretty Cure to protect her and end Refrain’s "Groundhog Day" Loop. Additionally, the three pink Cures of this movie cameo in the ending dance sequence of the concurrent Super Sentai VS Movie, Kishiryu Sentai Ryusoulger VS Lupinranger VS Patranger.

The movies are shameless cash-ins for the titular Cash Cow Franchise, but the chance to see all the Cures teaming up for an epic battle and interacting with one another is entertaining in its own right, and the series has proven successful.

The characters exclusive to these movies is listed Here.