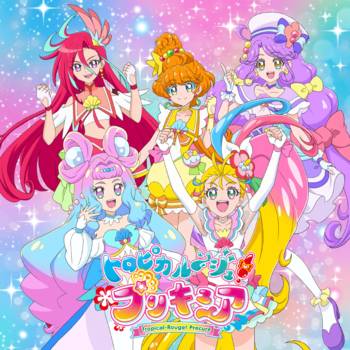 Tropical-Rouge! Pretty Cure is the 18th installment of the Pretty Cure franchise and the 16th continuity.

Manatsu Natsuumi is an impulsive first-year student who moves from Minamino Island to Aozora City. Things turn upside down when she meets Laura, a mermaid who is trying to protect the Grand Ocean (home of mermaids) from the menace of the Witch of Procrastination (who is planning to capture Laura). Manatsu becomes Cure Summer, and must now put an end to the nightmarish menace of the Witch, accompanied by Sango Suzumura as Cure Coral, Minori Ichinose as Cure Papaya and Asuka Takizawa as Cure Flamingo.

On February 28, 2021, it became the first Pretty Cure to be released in late winter.

Manatsu and the others prep for their school's Halloween festival while Laura tries to find a costume more suited for her.

Manatsu and the others prep for their school's Halloween festival while Laura tries to find a costume more suited for her.