Manga / Tropic of the Sea 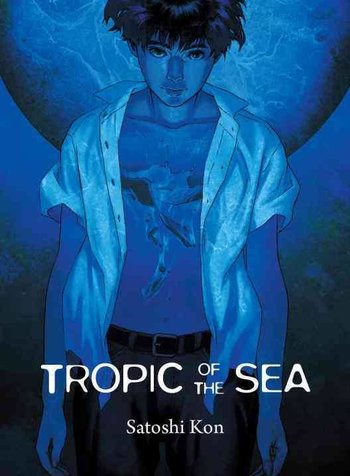 Tropic of the Sea (Original Japanese: Kaikisennote A pun consisting of "kaikisen", "Tropic" (as in "Tropic of Cancer"), with the "kai" replaced with a homophone meaning "sea") is a 1990 one-shot manga by the late Satoshi Kon. Tropic was Kon's first long-form manga, marking the beginning of his lesser known career as a manga artist before he moved on to animated feature films.

According to an old story, the sea around Ade, a little fishing village, was once rough and unforgiving, and fishermen would often go weeks without a single catch. Then, a priest found an odd, pearl-like egg washed ashore. Shortly afterwards he met the owner of the egg, a mermaid. There, he struck a deal with the mermaid: He and his ancestors would care for the egg at a shrine, worshipping and replacing its water every week for 60 years, then return it to sea, at which point they would receive a new egg to care for. In return, the mermaid blessed Ade with calm seas and plentiful fish bounties.

At least, that's the legend behind the odd tradition at Hiratsu shrine. The story centers around Yosuke, the son of Hiratsu's current priest. Yosuke tends to the legendary egg, soon to be returned, while experiencing the rapid growth of a small town in modern Japan. Ade has since become a bustling town, with new investors set to establish a lucrative touristic industry in the town, using the local mermaid legends as the main draw. Yosuke's priest father is eager to cooperate and advertise their curious egg to the world. After all, it will bring new jobs and opportunities to the town. Yosuke and his grandfather, however, grow concerned over how this plays into the promise made long ago. Yosuke grows even more concerned, when he starts to witness some odd sightings in the sea around Ade...

This being Kon's first big scale work, assailed by tight budgets and even tighter deadlines, it conspicuously lacks some of his signature themes and character depth, being a rather straightforward Urban Fantasy coming-of-age story with a linear, largely unambiguous storyline instead of the surreal, genre-defying works Kon is best known for. Kon would later admit he blushed several times while reading the script years later. Despite all of this, it is still an interesting exploration of tradition versus progress, and a great look at Kon's starting point before becoming the acclaimed animation director he is best known as today.