Different in Every Episode 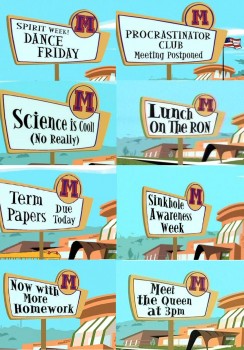 This doesn't even begin to cover the weird things that you will frequently see on the Middleton High sign.

If a Couch Gag is where something different shows up every time in the opening sequence, this is where something from the episode itself is always different. Not just the obvious story telling devices like characters, plot, and settings, (though it can play into them,) but rather more mundane things that are different just because they can be.

A subtrope of Running Gag.

May often overlap with Unlimited Wardrobe if most characters in the series are usually subjected to Limited Wardrobe, and one is different just because they can be.