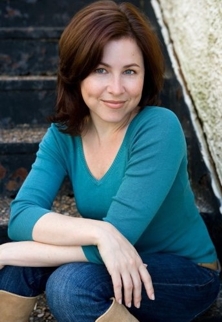 Louisa Michelle "Luci" Christian (born March 18, 1973) is an American voice actress born in Hamilton, Texas. Although she was originally going to pursue journalism in college, she switched to theater after receiving a scholarship to Angelo State University, where she got her bachelor's degree there. She also had her master's degree at Louisiana State University. Christian began her career in 1999 when she played bit parts for Those Who Hunt Elves for ADV Films and later rose to fame as Kaname Chidori in Full Metal Panic!. Later on in her career, she voiced roles for Funimation and ADV's Spiritual Successor Sentai Filmworks.

She is often in anime involving Chris Patton and Hilary Haag. She is currently the voice of Nami in the hit anime, One Piece. She also was Yukari Tanizaki in Azumanga Daioh, Mitsukuni "Honey" Haninozuka in Ouran High School Host Club, Nagisa in CLANNAD, and Uraraka in My Hero Academia.

Luci is married with two kids.

Tropes and trivia related to Christian's career include: