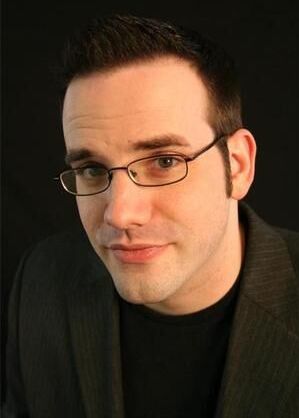 John Michael Tatum (born May 25, 1976 in McKinney, Texas) is one of the most notable American voice actors and ADR directors working for Funimation. Notably breaking out with Kyoya of Ouran High School Host Club, his roles seem to have an academic, calm, cool, and collected theme...though that can break every once in a while. He was also one of the co-hosts of That Anime Show with Terri Doty.

Is known to be a huge nerd who is particularly enamored with classy things like Literature with a capital L. Namely, really thick books and William Shakespeare. He once read Beowulf in Old English. This works to his advantage whenever they need a script writer for a show with tons of intellectual content or sophisticated grammar (Hero Tales, Ouran High School Host Club, Steins;Gate). However, he is also a fan of many other considerably more intellectual things, such as Doctor Who. He is the only dub cast member of Hetalia: Axis Powers who can actually speak the native tongue of his assigned character authentically; France (aside from America and England, of course).

Tropes concerning Michael and his roles:

He is simply one hell of a voice actor.