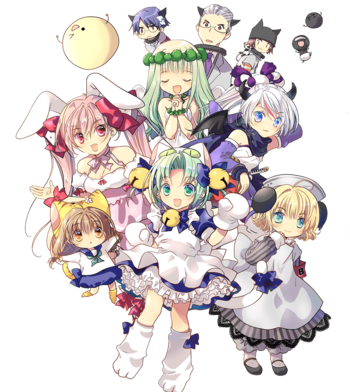 Moe parody franchise about an alien Catgirl named Dejiko who is an aspiring Idol Singer, and her cute hijinks. The ultimate example of the Otaku-oriented series.

The franchise began with Dejiko being an Advertising Mascot for the "Gamers" store chain. The character became popular, and the company decided to capitalize on her popularity by giving her a Backstory and an actual personality.

In a huge subversion, however, Dejiko's personality turned out to be the complete opposite of the cutesy-innocent moe girl she appears to be. She does her best to appear sweet, but when provoked (and it doesn't take much) she can be vain, petty, argumentative, selfish, and downright violent. She often takes out her frustrations by physically abusing her guardian, a floating sphere named Gema, or firing eyebeams at those who annoy her. She does have a good heart deep down, though, and the show's borderline-surreal sense of humor plays her anti-social tendencies for laughs, so somehow Dejiko manages to be endearing despite it all.

Do not confuse with Digimon.

The main characters, common to almost all the incarnations of the franchise, are:

The universe of Di Gi Charat has been presented in the following incarnations:

Di Gi Charat is generally silly fun, with characters who subvert the traditional kawaiiko (all of the main characters can be selfish, petty, or outright cruel at times), and lots of otaku in-jokes.