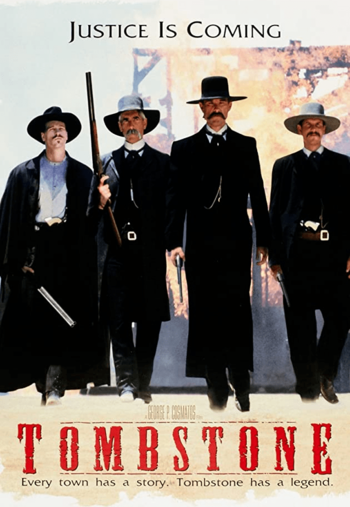 And hell's coming with him.
"All right, Clanton, you called down the thunder, well now you've got it! You see that? It says United States Marshal. Take a good look at him, Ike, 'cause that's how you're gonna end up. The Cowboys are finished, you understand? I see a red sash, I kill the man wearin' it. So run, you cur. Run! Tell all the other curs the law's comin'. You tell 'em I'm coming, and Hell's coming with me, you hear? Hell's coming with me!"
— Wyatt Earp
Advertisement:

Tombstone is a 1993 Western starring Kurt Russell, Val Kilmer, Sam Elliott, and Bill Paxton. Set in the 1880s in Tombstone, Arizona, it centers on Wyatt Earp (Russell) and his brothers Virgil (Elliott) and Morgan (Paxton) arriving to the boomtown hoping to settle down and strike it rich. However, they learn quickly that the town is caught in the deadly grasp of the criminal band known as the Cowboys, led by Curly Bill Brocius (Powers Boothe), the quick-draw specialist Johnny Ringo (Michael Biehn), and the Clanton family. Initially hesitant to join the lawmen of Tombstone, the Earps eventually run afoul of the Cowboys enough to create a conflict, leading to the famous shootout at the O.K. Corral. The Earps are aided by long-time friend Doc Holliday (Kilmer), whose terminal illness and hard-living ways does not prevent him from being the most feared duelist in the West. However, while Doc and Earps are triumphant at the Corral, their trouble with the Cowboys have only just begun...

The film is somewhat accurate, although it does portray an idealized version of the Earps while also making the whole story a lot more dramatic. In reality, the conflict between the Earps and the Cowboys is not entirely clear-cut; the Earps are generally regarded as the "good guys" only because they happened to be the ones wearing badges at the time.

The Other Wiki has articles of interest here

if you want to see the differences between Real Life and film. IMDB has a fairly complete compilation of differences here

The film had a messy production and wasn't initially screened for critics amidst a heavy holiday window, but wound up a sleeper hit in theaters and grew larger on home video to the point it is arguably the most popular Western film of the post-Eastwood era. It is also noticeable for its wide canvas of characters, with 85 speaking parts. It's an All-Star Cast of 1990s cinema, with, in addition to all the characters listed above, Dana Delany as Josephine Marcus, an actress and the female lead; Paula Malcomson as Virgil's wife Allie; Stephen Lang and Thomas Haden Church as Ike and Billy Clanton; Joanna Pacuła as "Big Nose" Kate Horony; and Billy Zane as the lead actor in Josephine's troupe. Charlton Heston has a cameo as a rancher and none other than Robert Mitchum provides the narration. Many small roles filled with actors who would see much larger success afterward, such as Billy Bob Thornton and Michael Rooker among many others. Kilmer's performance as Doc Holliday also drew raves and still resonates as a rather memetic role, which leads to Doc typically being regarded as his most memorable performance.

Doc Holliday does a coin walk in his first scene.

Doc Holliday does a coin walk in his first scene.