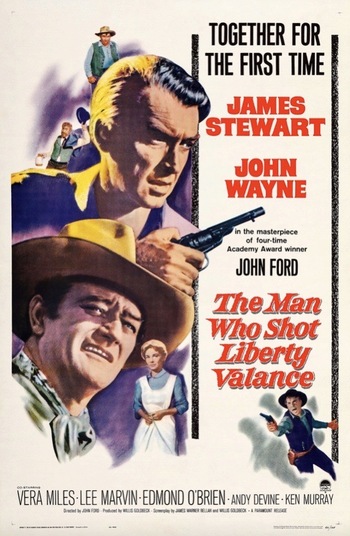 "This is the West, sir. When the legend becomes fact... print the legend."
— Maxwell Scott
Advertisement:

A classic 1962 Western, directed by John Ford and starring James Stewart and John Wayne in their first screen pairing.

The film opens with the return of Senator Ransom "Ranse" Stoddard (Stewart) and his wife, Hallie (Vera Miles), to the small frontier town of Shinbone. Ranse is an influential and well-liked political figure, but nowhere is he more revered than in Shinbone, the place where his career started. On this sad day, however, Ranse has come back to pay tribute to an old friend, Tom Doniphon (Wayne), who has recently died. Initially, he intends to slip in and out of Shinbone with little fanfare, but after a newspaper reporter corners him, he decides to reveal the true story about how his life in politics began.

We then flash back to years earlier, as Ranse arrives in Shinbone broken, bruised, and bloodied after being robbed and beaten by the notorious outlaw, Liberty Valance (Lee Marvin), who drips with malice and paranoia. With the help of Hallie and her parents, he recovers his health and vows to bring Valance to justice. For Ranse, a book-learned attorney with little knowledge of the real world, "justice" means "arrest and jail". But in Shinbone, where the marshal (Andy Devine) is completely spineless and almost everyone else is afraid of Liberty, justice is a bullet. This is the lesson that Tom tries to impress upon Ranse, that in Shinbone, enforcing the law requires a gun, not a book. Tom is one of the most respected men in Shinbone because of his prowess with a gun and because he is the only one who can, and will, stand up to Liberty and make him back down. The two become rivals for Hallie's affections, but each earns the other's grudging respect. Yet another conflict arises when Ranse and local newspaperman Dutton Peabody (Edmond O'Brien) find themselves challenging Liberty to serve as Shinbone's delegates to the territory's upcoming statehood convention.

By the way, this is the film responsible for introducing John Wayne's famous Catchphrase of calling someone "pilgrim."