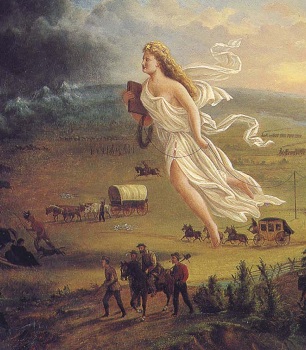 Manifest Destiny was a belief system and movement in the 1800s and 1900s which held that the United States of America (USA) was fated to extend from the eastern coast of North America to the western, and perhaps to encompass the entirety of North (and perhaps South) America - and even beyond (see, for example, its subsequent colonisation of overseas islands, such as the Philippines, Puerto Rico, Guam, etc.). Of course, most of the country's citizens were Christian at the time and so to them the theory of Manifest Destiny held that not only was it fated that the USA stretch from coast to coast, it was considered only right and good by God himself. Accordingly, any amount and type of killing and general barbarity was justified in service of this goal. Manifest Destiny was used to justify several aggressive wars of conquest, the suppression of several rebellions, and a few ethnic cleansings (of natives).

As can be seen by looking at a modern map, the destiny was fulfilled, except for the Canadian part of it extending to the Arctic Ocean, and down into Mexico. It may be useful to note that Manifest Destiny itself is the reason for this, as rapid and aggressive American expansion inspired the leadership of both nations to rally their citizens toward the defense of an otherwise non-unified country that hadn't quite gotten past the planning stages yet.

Of course, two hundred years ago most of North America wasn't owned by the USA. By modern moral standards, which frown upon both venal motives and killing, the Mexican-American War and the ethnic cleansings of the native tribes from their lands and onto reservations were repulsive. But even at the time, the idea was criticized by the more isolationist parts of the country as imperialistic. Among supporters, the direction of expansion, north or south, was subject to fierce debate. Northerners and abolitionists were afraid that a sea of new slave states would be carved out of the former Mexican territories and thus demanded the Oregon country to make up for it. Arguments over which of the new territories would enter the Union as slave states and which would enter as free states were a major part of the growing North/South divide that led to the Civil War, as was the idea, lobbied hard for by slaveholders, that the USA should expand southwards into Latin America and the Caribbean (generally because those nations would add thousands of extra slaveholding electors to the Union).

Manifest Destiny also inspired an imitative movement in Germany. Where Manifest Destiny held that English-language culture was destined to expand to the west, Drang nach Osten ('Eastward Drive') held that German civilization would have to do the same toward its east, if it were to be in any position to contest the English-speakers for leadership of the European peoples in the 'struggle' against the world's 'lesser races', and the 'Asiatic hordes' in particular. The German government attempted to realize this homegrown version of Manifest Destiny in the period 1939-45, with even less tolerance for the 'natives' swept up in it.