Guam (Chamorro: Guåhan) is a very small, tropical island in the Mariana Islands around two thousand miles east of the Philippines. It is one of the nearest US territories to Asia, the other being Northern Mariana Islands. The name 'Guam' comes from an old Chamorro word meaning 'We have everything we need here' or 'We are content with what we have'.

Ironically, Guam is an US territory, acquired because the USA wanted more islands (the rest of the Mariana Islands, collectively referred to as the Northern Mariana Islands, are an American commonwealth). Today Guam is used to give the USA more power in the Pacific; a third of the island is taken up by US military bases.

The island is part of a string of islands collectively known as the Mariana Islands; this archipelago was colonised by the Chamorro people, who are believed to have migrated from what is now Indonesia. The Chamorro developed their own language, and on Guam they even developed their own class system. One class lived near the coast and lived off of fish, and the other lived more inland and lived off of fruit. They also built strange 'Latte stones' throughout the island. These are pillars with a bulbous, smooth rock balanced on top of them. The Latte rocks can still be seen today and there is much speculation about why they were built.

In 1521, Portuguese navigator Ferdinand Magellan landed on the island during his famous circumnavigation of the world. After docking his ships in a natural harbour, his crew left the ship and begun exploring the island. The natives of the island discovered the ships and begun stealing stuff; the locals had a proto-communist approach to things, everything was everybody's property. When Magellan and his crew discovered this, they had difficulty stopping them, since the crew was trying to recover from an illness and the Chamorro were generally stronger than them. Magellan had to use cannons to stop the Chamorro taking any more stuff and named the island the "Island of Thieves" because of this.

In 1668 the Spanish began colonizing Guam. A Jesuit mission led by Diego Luis de San Vitores was sent to the island to convert the islanders. He made a deal with one of the Chamorro leaders, Quipuha, who renamed himself "Juan Quipuha" post-conversion and sold his land to the missionaries so they could build a cathedral. The natives were made to attend the cathedral regularly and learn Spanish. Quipuha also allowed the Spanish to build a port on the island, and Guam served as a base for ships travelling between Mexico and the Philippines.

In 1672, Quipuha died and was replaced by Matapang, who was much more suspicious of the Spanish and later killed San Vitores and his 17-year-old Filipino assistant Pedro Calungsod for baptizing his infant daughter without his permission (San Vitores was beatified in 1985, while Calungsod ultimately reached sainthood in 2012). This caused a terrible Spanish backlash, nearly leading to genocide and herding any surviving Chamorro into five heavily-monitored camps: Hagåtña, Agat, Umatac, Pago, and Fena. After this change, many Spaniards and Filipinos moved to the island, while the government used it to relocate exiles from the Marianas. The Chamorros intermarried with Spaniards and Filipinos to produce an entirely new culture and society.

In 1815, Mexico became independent and Guam became very much unneeded by the Spanish since it could no longer trade in between the Philippines and Mexico. Guam was neglected by Spain and communications between the two dwindled. Guam was lightly defended from a fort. In 1898, the USA declared war on Spain and a ship led by Henry Glass was sent to capture Guam. The US Ship sailed into the harbor at Piti, near the fort. The Guamanians had not been told that the USA had declared war on Spain, and so when the ship fired at the fort and missed, they thought that it was 'saluting' it. The fort returned the 'salute' and expected the ship to dock. When it did not, a naval officer and a translator sailed to the ship to welcome them to the island. Once aboard the ship, they were informed by Henry Glass that the USA had declared war on Spain. They had no choice but to surrender the poorly defended island.

The USA also captured the Philippines and used Guam as a 'Pacific Gibraltar' between the USA and the Philippines. During this time, Guam was entirely governed by the US navy. In 1941, after Japan went to war with the USA as part of World War II, Guam was occupied by the Japanese, who renamed Guam 'Great Shrine Island'. Any Americans on the island were taken prisoner and sent away to POW camps elsewhere. Many Americans tried to hide from this, but were found and killed, along with any Guamanians who helped hide them. The Japanese navy governed the island during this time; they outlawed English as a language, banned things such as radio and cars, and forced the Guamanians to speak Japanese.

By 1943, the Japanese began worrying that the US army would attack the island soon, and so ordered all Guamanians over the age of 12 to act as slaves and build fortifications and airstrips as to militarise the island. Many Guamanians died during this, those who would not work for whatever reason were shot, and some were shot for no apparent reason at all. After completion of the buildings, the Japanese army moved the entire population of Guam into concentration camps in the south of the island. In 1944 the US army surrounded the north of the island and began wresting the island from the Japanese. The Japanese refused to surrender and the battle was very horrific; it is reckoned that as many as two thousand Americans and eighteen thousand Japanese soldiers died. A Japanese soldier named Shoichi Yokoi hid in a cave during the battle, and would not come out until 1972.

After 1944, during the remaining years of the war, the USA built numerous military bases on Guam. The island became key to the USA's efforts in the Pacific. After the war, the bases remained in use and this caused the Guamanians to demand at least some autonomy. In the 1950's, Guam was given its own government, subordinate to that of the USA's. Guamanians were also given US citizenship and are allowed to immigrate to the USA freely. The bases are still in use today and serve as protection for US interests in the Pacific area. The bases have also been expanded to accommodate for soldiers being relocated to Guam. The continued presence of US bases on the Japanese island of Okinawa remains controversial, and if it were to be shut down, many of the soldiers there would likely be relocated to Guam.

Guam today is still classed as an 'Unincorporated Territory' or dependency of the USA (like Puerto Rico). The Chamorro language is still in use, but is under threat of being replaced by the English language. Steps have been taken by the Guamanians to try and preserve the language, but the fact that Guam is a US territory, and the high presence of English speaking military personnel, make this difficult.

On a completely unrelated note, the island is home to the world's largest Kmart.

Guam appears in the following media: 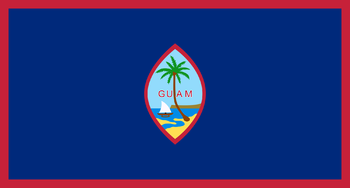 The dark blue field represents the seas, and the narrow red border the blood of its fallen freedom fighters. At the center is the territorial coat-of-arms, an almond-shaped emblem reminiscent of Chamorro slingshot stones. The device itself shows a proa sailing Agana Bay, with Punta Dos Amantes at the background, with the name of the territory on the foreground.
Miscellaneous