"A stabbing in Puerto Rico is like a cold in America."
—Tony Atlas
Advertisement:

Stuck right between regions - sometimes it's the smallest of the Greater Antilles, sometimes the largest of the Lesser - Puerto Rico, a mere 110 miles by 40 miles if measuring loosely, is one of two current United States commonwealths/semi-autonomous territoriesnote the other is the Northern Mariana Islands, population around 50,000. This has some indefinite difference with simple territories (such as Guam), but legally works out to the same as the United States Constitution does not recognize a "commonwealth" as a true status. This means that the island's population is disenfranchised in presidential elections unless they relocate to one of the states proper, despite the fact that they number almost 3.2 million as of 2020, more than all other territories combined and even several states. However, Puerto Ricans are full US citizens free to live, study, work, and vote in the mainland without dealing with immigration hurdles, resulting in a large-scale exodus year by year. From 2010 to 2020, the territory's population saw a decrease of almost half a million people.

The island's first inhabitants were the Tainos, an indigenous tribe similar to those of South America, but less aggressive. When the Spanish found the island (in Christopher Columbus' second trip to the New World) the Tainos believed them to be gods (similar to what happened with Hernán Cortés in Mexico) and submitted to them, until they got suspicious and decided to try drowning one of them to see if he was immortal. Of course, he proved not to be, leading to an uprising against the invaders, but they were no match and ended up enslaved and eventually absorbed into the local gene pool (a similar fate was suffered by the African slaves). Puerto Ricans today are proud of their multicultural origins, as can be seen in everything from its towns (some still bearing Taino names) to the African rhythms of the local music.

Settled in 1508 by Juan Ponce de León, its first governor, Puerto Rico was ruled for most of its history by Spain, with the exact quality of said rule depending on the King (or later Queen) in power. The 19th century was an especially troubled time, with several succeeding monarchs and their Prime Ministers allowing reforms, only to later rescind them and later reinstate them. One high point came when Ramón Power, a Puerto Rican officer in the Spanish Navy descended from Irish immigrants, served as vice-president of the Spanish Cortes (equivalent to Parliament) during the Napoleonic Wars.

Most of the late 19th century history of Puerto Rico can be characterized by the development of political organizations seeking autonomous rule for the island. This was finally achieved in 1898, when the first autonomous government of Puerto Rico took power approximately one month before the United States invasion. It is worth noting that said government was similar, at least in broad strokes, to the Dominion of Canada: the only Spanish military officer on the island was its Governor-General, and served exclusively as the representative of the Crown; Puerto Rico agreed to answer to the Spanish crown on matters of defense and foreign affairs, but retained complete power over internal ones; and for the first time, could raise its own defense forces, land and sea alike, though it would depend on the Spanish Armed Forces in wartime.

Since 1898, Puerto Rico's relationship with the U.S. has been alternately good (sugar boom in the 1920s, ratification of the Puerto Rican Constitution and Operation Bootstrap in the 1950s, modern-day pharmaceutical and manufacturing boom) and bad (Governors Guy V. Henry, E. Montgomery Reilly, Blanton Winship). A recent report on the island reveals that the United States does not and will not consider the current status as "commonwealth" a viable option for the island's permanent future. The generally-accepted options for Puerto Rico's future (besides the status quo) are independence (which has a small but significant following) and statehood (which has a fairly large following but not a majority). The US Army has designed a 51-star flag just in case the latter happens. Various presidents and presidential candidates in the U.S. have actually expressed support in favour of statehood, and Puerto Rico voted to seek statehood in a referendum held in November of 2012. A second referendum held in 2017 revealed that an overwhelming 97% of Puerto Ricans support statehood... out of those who voted, which is significant because there was historically low voter turnout.note Less than a quarter of the population actually went to the polls Whether either of these referendums will hold any weight in the future remains to be seen; given the current extremely divided state of the U.S. Congress, the issue remains up in the air.

Puerto Rico is home to many beautiful beaches, 56 animal and 239 plant indigenous species, one of which is the emblematic coquí frog. Puerto Ricans have distinguished themselves in many fields, including music (Tito Puente, Jose Feliciano, Hector Lavoe), literature (Rosario Ferré, Tato Laviera, Miguel Algarin), the military (RADM Frederick Lois Riefkohl, USN; ADM Horacio Rivera, USN), and beauty pageants, with five victories in Miss Universe (Puerto Rico often sends representatives to international events separate from the American ones), second most successful in that pageant, and not surprisingly as Puerto Rican women have been described as staggeringly beautiful since Columbus' voyage there in 1493. However, poverty remains an ongoing challenge in many areas, and the catastrophic devastation wrought by 2017's Hurricane Maria, followed by a slow recovery (complicated by mainland U.S. political interests seemingly intent on punishing the island) have certainly not helped at all. The Government's response to the disaster inflamed political debate about whether or not Puerto Rico is really seen as a full part of the U.S, or whether the mainland considers Puerto Rican citizens second-class.

Puerto Rico uses the US dollar, most of its GDP comes from either tourism or the pharmaceutical sector (it seems to oscillate every few years), and home to some of the nicest people in the world, especially in the rural areas. Roman Catholicism is the single largest denomination with the most adherents, as is the case with most Latin American countries, though Protestants and other non-Catholic denominations make up a substantial minority. There are also small Jewish, Muslim, Hindu, and Buddhist communities. Spanish and English are both official languages at the moment, with each generation generally learning to speak English better than the last. Nonetheless, a working knowledge of Spanish never hurts for those visiting.

In 2018, its birth certificate policy has been ruled unconstitutional, and transgender Puerto Ricans are now able to correct their birth certificates. As of 2019, the U.S. House of Representatives and the actual governorship of Puerto Rico are pushing pro-statehood legislation, which may or may not become relevant in the coming years.

In 2019, governor Ricardo Roselló was removed from office amidst corruption charges and controversial statements made privately through the messaging app Telegram. This was followed by calls for his successor, Wanda Vásquez Garced, to resign a few months later after the Puerto Rican government was caught withholding aid for itself during Hurricane María (who, despite not being involved with the scandal herself, was blamed due to being a member of the party and administration that did so).

Many of the works previously listed under Puerto Rico in the media have been moved to their own index.

References to Puerto Rico in media: 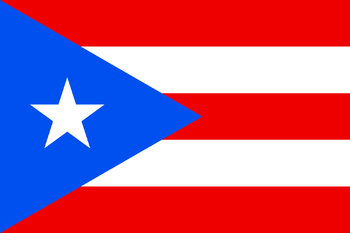 It is no coincidence that this flag is similar to that of Cuba (except with the blue and red reversed), as the flag was designed by the same activists who demanded for Cuba's independence from Spain.
Miscellaneous