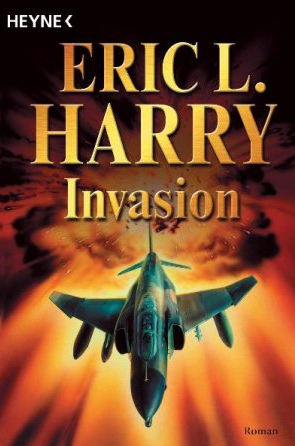 Invasion is a 2000 novel by American author Eric L. Harry, detailing a fictional invasion of the United States by the People's Republic of China.
Advertisement:

The United States turns its massive offensive military into a much smaller force, switching its priorities to domestic matters, beginning with using the U.S. military budget to fill the gap in Social Security's trust fund left there by past congresses and presidents who spent the money on other things, and continuing onward in the same theme.

As the U.S. is downsizing its military, China becomes a world superpower, building new supercarriers and becoming a dominant sea power in addition to a growing economic power. Eventually, China goes down the route of conquest. China invades all of Continental Asia, Japan, Australia, and New Zealand. They then turn their forces in the Middle East until reaching the shores of the Mediterranean Sea. This concerns the European Union which sends a joint fleet of ships to the Straits of Gibraltar, only to be pinned down there.

China instead throws its resources into attacking the Caribbean. Due to the Monroe Doctrine, new President Bill Baker, who came to office on a pro-war platform, has to make a critical decision: to try to halt them with conventional forces, or use nuclear weapons.

The U.S. must make a decision as the Chinese invasion forces in Central America gather steam: to build traditional naval super-carriers to meet the new Chinese ones, or to build highly experimental missile supercruisers capable of firing thousands of missiles at once, showering its target with overwhelming force while having a crew of only around 100 due to the extent of automation. They might be more effective but are also untested, and the U.S. does not have the resources for both. Baker decides to back the supercruisers.

As the likelihood of invasion via the Gulf of Mexico comes, many Americans leave the exposed states. The Joint Chiefs of Staff are not sure if this is another diversion attempt and the Chinese might come from the east or west coasts. The U.S. President orders the military to plan for those eventualities as well. A full war economy with full mobilization is called up, including all able-bodied women, which includes the U.S. President's daughter.

Baker refuses to order a nuclear strike and orders the military to meet the threat with conventional arms come what may. He is convinced any nuclear strike will lead to a series of escalating exchanges that will leave the two countries not worth the fight. The U.S. then braces for an invasion.