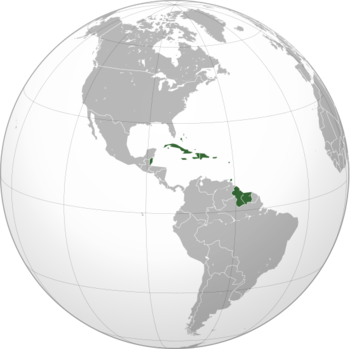 The oceanic part of The Americas that was once full of pirates, slaves, busty women, busty women pirates and women slaves who may or may not have been busty.

In the present day, the Caribbean nations are mostly poornote Not that poor; the per capita income for each is actually quite high, but the size of the islands combined with the limited area for industrial expansion and reliance on imports doesn't permit more diversification, hence many earn their livings through subsistence jobs. but have a strong tourism industry due to their tropical climate and close proximity to the United States and Canada.

This is a list of the Caribbean countries that aren't part of Latin America. Because of that, some countries that are geographically part of the Caribbean like Cuba or the Dominican Republic are not here, while Bermuda in North America, Belize in Central America and Guyana and Suriname in South America are. What separates these countries from Latin America is the prominence of West African and Anglo-Indiannote And we mean real Indians from the Indian subcontinent, not a misleading term for Native Americans. The British imported quite a lot of Indians as indentured laborers, FYI culture among the populace, whereas Latin/Romance culture dominates elsewhere. Just think of this list as a list of countries who are members of a "Caribbean Community" (a real organization