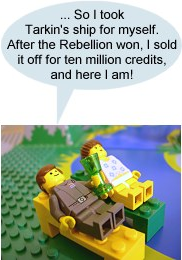 The final shot of a story is a character relaxing on a sun lounger with a fruity umbrella drink, looking pleased with themself on a sun lounger. Most likely wearing a colorful Hawaiian shirt amid a sea of Hula and Luaus. Neither of which is to say this is actually supposed to be Hawaii (which would be a really stupid place for an American to flee to...) — it's more likely to be somewhere in Latin Land, the Caribbean or Oceania in general. British media has its own variation, usually involving the Costa del Sol, a famed retreat of British gangsters, or even Blackpool, where many Scottish gangsters avoided heat. More modern works will substitute Southeast Asia.

As far as music goes, either "Aloha Oe" or something generically calypso will be playing in the background.

This can serve as a "Where Are They Now?" Epilogue for a Karma Houdini villain, in which case a triumphant Evil Laugh is rather likely. It's also commonly Invoked, or Discussed by characters who never ultimately manage to fulfill it (having clearly never heard of Retirony, One Last Job or the Unspoken Plan Guarantee).

This is the natural result of a successful Run for the Border.

Contrast You Wake Up on a Beach, when the story begins with the character on the beach.

As this is an ending trope, spoilers will be unmarked below!