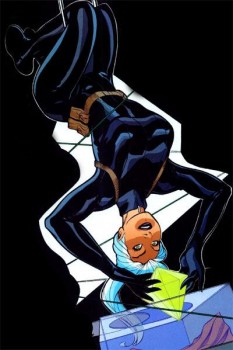 Walking, talking, purring class. She doesn't steal; she liberates. She doesn't lie; she fibs. She steals from the rich and gives to... herself usually, but she's so graceful and easy on the eyes that you'll want to let it slide.

When The Hero first meets her, on a rooftop or a darkened bedroom, he'll be paralyzed with indecision — should he arrest her or ask for her number? This dilemma is usually short, as she takes advantage of his distraction to escape/knock him out.

Bonus points if she has a cat theme, is named "Katherine", "Kitty", or "Felicia", or makes bad feline puns.

She doesn't always wear a Spy Catsuit, but if she does she wears it well.

Either way, Classy Cat Burglars are sophisticated and highly skilled. They target only the finest items (and best-protected) for "liberation", and pride themselves on leaving little or no clue on how they accomplished their burglaries. A fair number of them are independently wealthy and couldn't care less about the money; they just want a good challenge. (Detectives understand that a well-guarded, priceless item is the best bait in the world for these sleek critters). The actual term "cat burglar" comes from the notion that such a person is quiet as a cat (one that never claws its way up the drapes, gets into fights with the dog, or tears your refrigerator to bits).

Like her spear counterpart the Gentleman Thief, this felonious feline usually regards the police with a certain amount of disdain and condescension, and frequently leaves behind "calling cards" announcing who performed the crime. With a Worthy Opponent, she may have a less adversarial relationship, verging at times on friendship. If the opponent is of the opposite gender (or not) this may be fraught with Foe Romance Subtext.

Compare Phantom Thief. If the hero is very, very (un?)lucky, may result in Dating Catwoman.

A male version of this trope called "The Cat" who's blackmailed into stealing other people's favorite stuff.

A male version of this trope called "The Cat" who's blackmailed into stealing other people's favorite stuff.