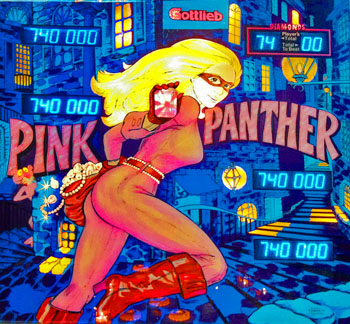 Go ahead, hum that song.
Advertisement:

Pink Panther is a pinball game based on the popular comedy film series and cartoon character. It was designed by John Buras, illustrated by Jerry Simkus, and released by Gottlieb in 1981.

The game's premise is a very loose adaptation of The Return of the Pink Panther; the Panther is pursuing an attractive female jewel thief through a dimly-lit mansion as she pilfers its collection of gems. Get the black diamonds to enable the Secret Passage, then light the flashlight and enter the Hidden Staircase. Lock two pinballs to explore them, then start three-ball multiball for a frantic chase to collect the blue diamonds scattered around the playfield. Players who can collect the most diamonds are rewarded with a free game.

Pink Panther is noteworthy for being Gottlieb's first multi-ball pinball game. The rules are not too hard to grasp, yet the game is fast enough to tease players into one more try. Unfortunately, it wasn't profitable for Gottlieb, as fewer than 3,000 tables were produced, not enough to recoup the costs of the license. As such, used games for sale tend to fetch high prices from collectors.