Film / The Return of the Pink Panther 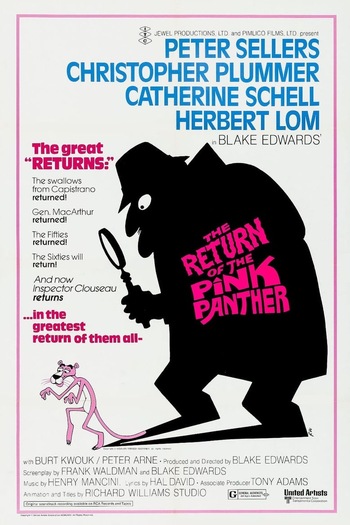 The Return of the Pink Panther (1975) is the fourth film in The Pink Panther franchise, and the first one directed by Blake Edwards and starring Peter Sellers as Inspector Clouseau since A Shot in the Dark over a decade earlier.

The Pink Panther diamond is stolen from a Lugash museum, and Clouseau is called upon to seek it out once more. The evidence suggests the Phantom is again responsible, but in fact Sir Charles Lytton (Christopher Plummer) has been framed. The film follows the parallel plots of Clouseau trailing Lytton's wife Claudine (Catherine Schell) to Switzerland and Lytton's journey to Lugash to try and find out who actually did it. Meanwhile, Chief Inspector Dreyfus' (Herbert Lom) repeated attempts to kill Clouseau land him in a mental institution at the end, leading directly into The Pink Panther Strikes Again.

Carol Cleveland of Monty Python fame has a small part as a woman diving into a swimming pool.