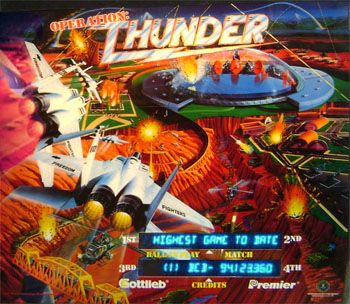 Operation: Thunder is a Physical Pinball Table released by Gottlieb (under the "Premier" label) in 1992. Developed by Ray Tanzer with artwork by David Moore and Constantino and Jeanine Mitchell, it was Gottlieb's last game to use an alphanumeric score display.

The game puts the player in charge of a squadron of F-15 Eagles and Stealth Fighters, waging an unyielding air attack on the enemy such as destroying radar installations, strafing tank columns, and attacking the domed power plant. Light up the mountainous terrain with a barrage of bombs and missiles, but make sure you don't run out of fuel lest you crash and burn. Only the best pilots will make it through all eleven missions, and those who survive the Final Assault will be rewarded with a hero's welcome and a well-earned promotion.

Many see Operation: Thunder as a fun popcorn table for intermediate players, with a nice variety of shots and an attempt to bring Video Game-style gameplay progression to pinball. Although the table's linear sequence and fuel-based time limits turned off some, others find it a refreshing change of pace from other, more open-ended games of the era. One thing everyone dislikes, however, is the game coming to an abrupt end after all of the missions are completed. Fortunately, this is an operator-selectable option, and most collectors leave it off to promote longer playtimes.