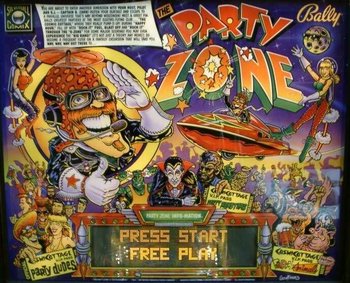 Welcome to the Party Zone, can I take your order?
"You are about to enter another dimension, with your Host, Pilot and DJ — Captain B. Zarr. Fasten your seatbelts and escape to a parallel Universe, that's way beyond Wisconsin! Meet & greet pinball's greatest partiers at the most electro-flying club... 'The Cosmic Cottage' where they really pump-it-up! During 'Happy Hour' fill up with 'Rock-It' Fuel, Blast Off, and 'Rock-It' through the 'O-Zone' for some major scoring. You may even experience the 'Big Bang'! (It's not just a theory anymore!) So become a frequent flyer on a fantasy excursion that will take you way, way, way out there to ... The Party Zone!"
— Introductory text
Advertisement:

The Party Zone is a Physical Pinball Table designed by Dennis Nordman, with artwork by Greg Freres and music and sound effects by Dan Forden. It was released in 1991 by Williams Electronics under the Bally label.

As indicated by the introductory text on the backglass, The Party Zone is centered on an interdimensional party under the watchful eyes of the wildly enigmatic Captain B. Zarr. Win the Door Prize, enter the Dance Contest with the Dancing Dummy, shoot the Rocket Ramp for the Ozone Bonus, and make sure to Eat, Drink, & B. Merry. Start up the Super Sonic Robotic Comic for a Laff Attack, and don't hesitate to Make a Request from the DJ. After all that, get the Party Animals, Party Monsters, and Party Dudes into the Cosmic Cottage, then start Happy Hour Multiball and try to collect enough Rock-It Fuel for the Big Bang jackpot — or get booted into the End Zone and out of the Party.

Trivia buffs will note that this was the second pinball table released under the Bally label to feature a dot-matrix display (after Gilligan's Island). There are also unconfirmed rumors that this was originally intended to be a Ghostbusters Licensed Pinball Table, only to be changed when the deal fell through.

A digital version was available for FarSight Studios' The Pinball Arcade before their license to all Williams and Bally tables expired on July 1, 2018. Another digital version is currently available for Pinball FX3, along with a remastered version that includes the typical Zen Studios flair.