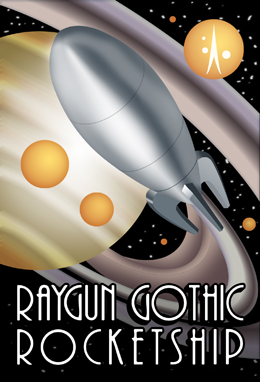 Bang, zoom, straight to the Moon!

A diagram anatomised the stages of the Saturn V already shed by the Apollo 11. The spacecraft now looked surprisingly like the bullets of Verne or Méliès, though sleek aluminium-steel-glass-phenolic rather than rivet-studded brass.
— Moon Moon Moon, by Kim Newman
Advertisement:

During different eras, people had different stereotypical visions of future spacecraft. Sometimes it came from the movies, and sometimes it bled into the movies from real life. This design is a classic — it's the standard pointy-nosed, sits-on-its-fins spaceship. This piece of Raygun Gothic comes from the time when T-bird fins were actually seen as futuristic rather than retro. Spaceships were more likely to be referred to as rocketships by excited seven-year-old boys, and the designs could feed off the ongoing space race and concurrent developments which were based around a long steel tube with a pointy tip that had fins on the bottom and belched flames out of its base to reach for the skies.

While once the definitive spaceship image, nowadays you generally only see these as parody or homage. Their typically phallic shape is a common target for mockery. However, with the advent of vertically landing reusable rockets with cold-formed stainless steel hulls, this design is now starting to become Vindicated by History.

A few features are particularly common. The design will often necessitate a vertical take-off, and the fins are frequently used for the rocket to stand on, leading to one of the style's alternate names: "tailsitters". Thus many will have three or four fins. Also, unlike modern rockets, these typically don't discard stages to lighten their load for the trip, so the entire rocket goes into space and back. Note that in a setting with more than one style of spacecraft, this design will generally be used by humans. Aliens generally used its nemesis — the Flying Saucer. For the modern equivalent, see Standard Human Spaceship.

Only very indirectly related to the small rocket motors used to provide retrograde thrust to an orbiting spacecraft (which even the earliest Space Race orbiters had).