Pinball / Elvira and the Party Monsters 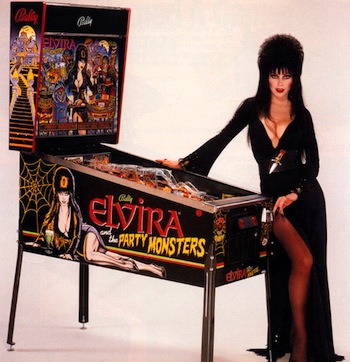 "How 'bout another ball?"
Elvira and the Party Monsters is a 1989 Williams Electronics pinball (released under the Bally label), designed by Dennis Nordman and Jim Patla, with art by Greg Freres.
Advertisement:

As the title indicates, this Licensed Pinball Table features Elvira, Mistress of the Dark hosting a rockin' party for an assortment of ghouls, ghosts, and monsters. There's pizza to eat, punch to drink, a sizzling barbecue, dead heads to wake, dancing boogie men, and a monster water slide to ride. Of course, with Elvira around, there's also plenty of innuendo and suggestive humor to make the party really memorable.

A video adaptation of the pinball was included in the game Pinball Jam for the Atari Lynx, along with an adaptation of Police Force. A digital version of the game was available as part of FarSight Studios' The Pinball Arcade collection before their license to all Williams and Bally tables expired on July 1, 2018.

In 1996, the sequel Scared Stiff was released.