Pinball / The Empire Strikes Back 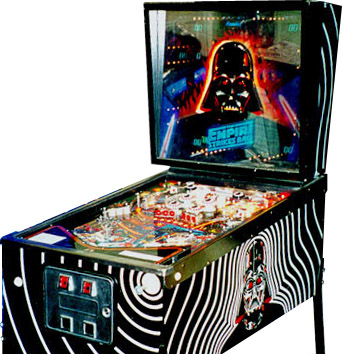 The Force was not with Hankin.
"The movie of the year is now the pinball of the year."
—Advertising flyer
Advertisement:

The Empire Strikes Back is a Physical Pinball Table produced by Hankin Manufacturing. It was released in 1980 exclusively in Australia, and is believed to be the very first Star Wars licensed pinball game ever.

The game depicts several key scenes from the movie, with particular focus on the Imperial assault on Hoth. Guide the Snowspeeders against the AT-ATs looming overhead, hit the Rebel insignias to increase the value of playfield targets, then shoot down the four TIE Fighter rollovers to increase the bonus multiplier. Hit the Darth Vader drop targets on the two sides of the playfield to raise the value for Dagobah and Bespin, then visit Yoda and Lando to claim the points.

Pinball buffs will recognize the playfield as a hybrid of Williams Electronics' Firepower and Bally's Space Invaders. The game plays reasonably well, though weak flippers (a common problem for Hankin games) mar the experience somewhat. Unfortunately, the license was not enough to save the company; Empire became the last game Hankin released before closing its doors.

With only 350 tables produced and distributed in Australia, it is an extremely rare treasure for die-hard collectors.

The Empire Strikes Back pinball demonstrates the following tropes: