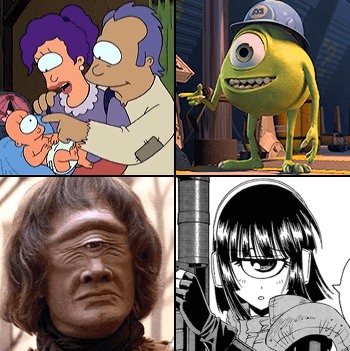 L - R, top to bottom: baby Leela and her parents,
Mike Wazowski, Rell, and Manako.
Gwog: Geez... what a bunch of freaks.
Dr. Thaddeus John Euphemism: Says the alien with one eye.
— The Petri Dish
Advertisement:

To put it quite simply, a character or creature that only has one eye.

Monocular vision is symbolic of metaphorical narrow vision and lack of depth perception. As such, many human villains have one eye as an indication of their simplistic worldview. This also provides an excuse for an Eyepatch of Power. Characters who lack perspective on a temporary basis might sport Peek-a-Bangs or some other ocular obtrusion.

It should be noted that "cyclops" more accurately translates to "circle-eye" or "wheel-eye", referring to the eye's size. Therefore, "cyclopean" technically means huge, and not one-eyed (not to mention that the Cyclopes themselves were giants).

Not to be confused with the Faceless Eye, as cyclopes typically have a recognizable facial structure (or at least a mouth), or with One-Eyed Shot, which is just a camera shot of a person's eye. In modern fiction, the visual of a single eye can give a character an intimdating Uncanny Valley feel as easily as it can be played as a cute trait on an adorable character.

For other deviations from normal eye structure, see Eyeless Face, Third Eye, Oculothorax, and Extra Eyes. Compare to the robotic version, the Cyber Cyclops, and Eyepatch of Power. For the mythological being, specifically, see Classical Cyclops.

Oh, wait, were you looking for that guy with the visor?

Manako tries out various protective contact lenses, as getting things stuck in your eye is a common monoeye problem.

Manako tries out various protective contact lenses, as getting things stuck in your eye is a common monoeye problem.