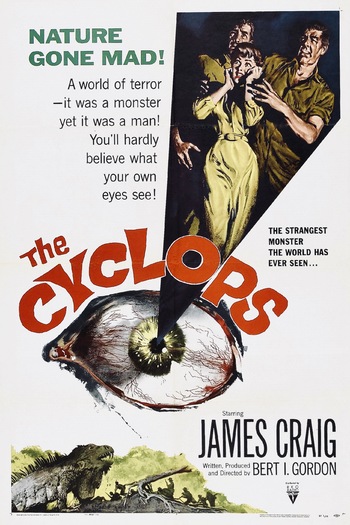 "The Cyclops is one that starts kinda slow, but once it gets going, it gives us all the cheesy thrills that make us oh so happy."
— James Rolfe, Cinemassacre's Monster Madness
Advertisement:

The Cyclops is a delightful bit of 1957 Sci-Fi Horror hokum directed by Bert I. Gordon.

Disobeying orders from the Mexican government that the Tarahuamare Mountains are off limits, the gang piles into Lee's plane and flies off. Halfway to their destination, rough winds force the plane to make an emergency landing in a narrow valley.

It becomes evident that Bruce isn't the sole object of Marty's search. He's brought a radiation-detecting device with him (which he refers to as a "scintilator" and which resembles a hair dryer the prop department tricked out) in the hopes of locating uranium deposits so he can file a claim with the Mexican government as part of some kind of swindle/get-rich-quick scheme.

Russ sees a giant lizard, but nobody believes him. Then, searching for Bruce, he and Susan stumble across a giant mouse, which is then caught and eaten by an equally giant hawk. Russ speculates that radiation from the uranium deposits Marty is so obsessed with have caused the local wildlife to grow to gigantic proportions.

Monsters or no monsters, Susan is determined to find Bruce, and the gang presses on. But the giant animals aren’t the only dangers of the valley. The biggest mutant of all is an enormous man some fifty feet tall, with one side of his face partially melted, obliterating his eye, while his remaining eye is bulbous and glaring. Seemingly unintelligent, the "cyclops" bellows, roars and grunts, and becomes hellbent on capturing the interloping humans… especially Susan, who begins suspecting a connection between the cyclops and Bruce.