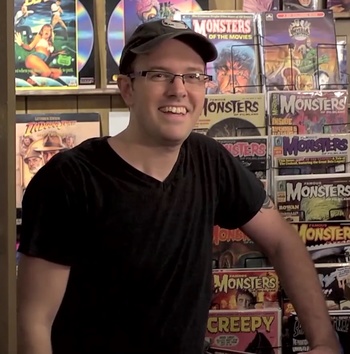 Not to be confused with that other guy.
"This game is ass."
— The Angry Video Game Nerd
Advertisement:

A film buff born in Philadelphia and raised in New Jersey with directing aspirations, James Duncan Rolfe (born July 10, 1980) remained mostly under the radar until 2006, when he posted a couple of joke reviews he made for his friends a couple years earlier on YouTube, under the name "The Angry Nintendo Nerd". A few years of booming popularity later, he eventually evolved into The Angry Video Game Nerd.

Aside from making Nerd videos, he has a large filmography dating back to 1989 registered on his website Cinemassacre

, he has two other shows — Board James and You Know What's Bullshit? — and also established an improv series with a few friends of his called OverAnalyzers.

He also often posts videos to the site with him acting as himself, either performing interviews, documentaries, or movie reviews, most notable of which is Cinemassacre's Monster Madness, an event that he has taken part in every October since 2007 where he reviews one horror film every day of the month, whether it be an old classic or an obscure treasure, often in keeping with some sort of theme (So Bad, It's Good films one year, the entire Godzilla series another).

He is affiliates with both ScrewAttack and Channel Awesome (despite, or perhaps due to, the Nerd's eternal conflict with The Nostalgia Critic).

James Rolfe and his work provide examples of: