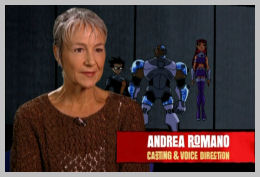 Ever seen an animated show or feature and all you can think of is what an amazing voice cast it has? This is most likely the lady to thank.

Andrea Romano (born December 3, 1955 in Long Island, New York) is a very prolific voice director and casting director working across many well-known and respected animated productions. She has been one of the most consistent mainstays of the DC Animated Universe alongside Bruce Timm and Alan Burnett. She retired from the business in August of 2017, at the age of 61, naming Sirena Irwin

Productions Andrea Romano has been involved with: