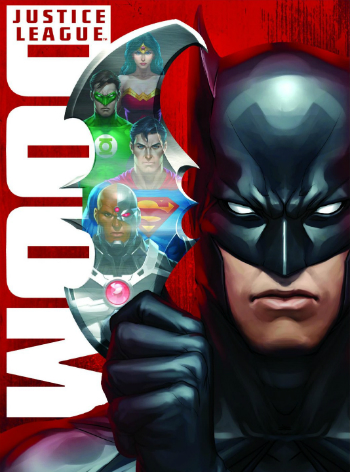 "My actions don't require any defense. In the same situation, I'd do it again. [...] As individuals, and even more so as a group, the Justice League is far too dangerous to lack a failsafe against any misuse of our power. [...] What if we ever use it for some other purpose? If you people can't see the potential danger of an out-of-control Justice League, I don't need to hear a vote. I don't belong here."
— Batman
Advertisement:

A film in the DC Universe Animated Original Movies line, Justice League: Doom is a loose adaptation of the classic Justice League of America: Tower of Babel storyline. In another one of his Evil Plans, Vandal Savage has gathered together Metallo, Bane, Cheetah, Mirror Master, Star Sapphire, and Ma'alefa'ak to form a Legion of Doom. Armed with plans designed to take out the Justice League, they set out to defeat their enemies and Take Over the World...

The last movie written by Dwayne McDuffie before his death, the film was released in February 2012.

and not Wally West like the Flash he voiced in Justice League. Other voice actors include Bumper Robinson (Transformers: Animated) as Cyborg, Paul Blackthorne (The Dresden Files) as Metallo, Carlos Alazraqui as Bane, Grey DeLisle as Lois Lane, and Claudia Black as Cheetah.