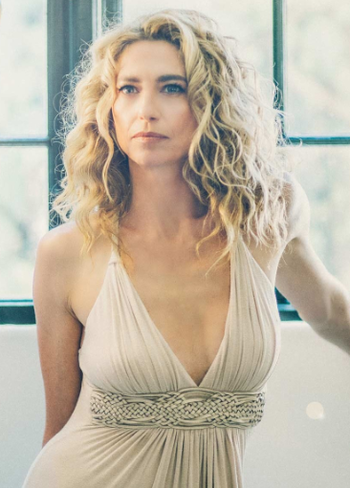 "'Listen, I don't care how my character looks, just make sure she's got really great boobs.' And Josh said, 'Oh, we've got a slider. We can make them go up, we can make them go down...' And I was like, 'Oh my god, of course you do.'"
— On Chloe Frazer's Boobs of Steel in Uncharted 2
Advertisement:

Claudia Lee Black (born on 11 October 1972 in Sydney, Australia) is an Australian actress best known for her Science Fiction roles, most notably as Aeryn Sun in Farscape (for which she won a Saturn Award) and Vala Mal Doran in Stargate SG-1. A familiar face from Australian TV, she had breakthrough roles in both Queen of the Damned and Pitch Black (dying messily in each). Until late in her career, spotting Black's screen credit was a telltale sign of Australia Doubling.

Since then, Black has popped up in numerous American productions — usually as a Fake American — including NCIS and The Dresden Files.

Though her natural accent (switching effortlessly between Australian, British and New Zealander) is rather underused on network TV, it should be immediately recognizable to nerds of all stripes. Black has a formidable résumé of voice credits, including Dragon Age, Mass Effect, Uncharted, God of War, and Diablo III. Basically, if the game contains a female Brit, she's either voiced by Black or Jennifer Hale.

She also plays a mean guitar.

A "Stargate" Wizard of Oz

Example of:
Off to See the Wizard

A "Stargate" Wizard of Oz