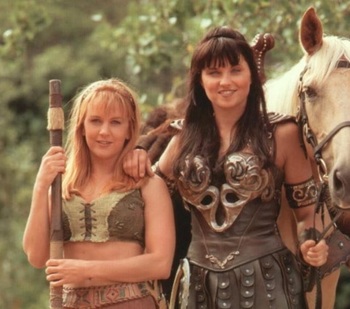 Xena (right) and her li'l buddy Gabrielle (left)
"In a time of ancient Gods, Warlords, and Kings,
A land in turmoil cried out for a hero.
She was Xena, a mighty princess forged in the heat of battle.
The power.
The passion.
The danger.
Her courage will change the world."
— The Opening Narration, read by Don LaFontaine.
Advertisement:

Xena: Warrior Princess starred Lucy Lawless as an amazonian leather-clad warrior-woman fighting monsters while battling inner demons based on sins from her warlord past. Xena originated on Hercules: The Legendary Journeys as a Worthy Opponent to the title character, and became so popular with fans that she got her own show.

Immediately after her split from Hercules, she gained a friend and traveling companion in Gabrielle. Gabrielle was an aspiring bard who wanted to chronicle Xena's adventures, and the pair became a major source of Les Yay in the nineties. Word of God goes back and forth on whether they were simply Heterosexual Life-Partners, with conflicting accounts from all sides. Suffice to say, the show offered enough winks and nudges to satisfy the shippers, while keeping under the radar to avoid tempting the wrath of network affiliates.

Xena had many things in common with Hercules, even sharing certain plot lines between the two series. The one main difference was that while Hercules was a bit hesitant to kill, Xena had no such qualms and would regularly kill enemies. The show was equal parts satire, dark drama and lowbrow comedy, often in completely nonsensical combinations. Anachronism was par for the course.

The series ran from 1995-2001, and at one point was the most popular show in the world, surpassing Baywatch for the title.

The series had several comic book spin-offs by Topps Comics and Dark Horse Comics (including two crossovers with Evil Dead), which ended following the show's end. In 2007, Dynamite Entertainment acquired the rights to the comics and published two story arcs (Contest of Pantheons and Dark Xena), which essentially act as a Fix Fic, reversing many of Season Five's plot developments as well as undoing the season finale.

The characters from Xena appeared in Hercules and Xena – The Animated Movie: The Battle for Mount Olympus, an Animated Adaptation which combined the two series.

Produced by Renaissance Pictures and Universal for the syndicated Action Pack block.

NBC has put up the entire series for free viewing

Now has a recap page that's complete, but could use some love.

Xena tries to invoke this by attacking the Amazon Queen Cyane while she's naked during a ritual, however Cyane turns the tables on her and humiliates Xena by ripping the clothes Xena herself was wearing and then dressing herself in them, forcing the furious Xena to flee in shame.

Example of:
Defeat by Modesty

Xena tries to invoke this by attacking the Amazon Queen Cyane while she's naked during a ritual, however Cyane turns the tables on her and humiliates Xena by ripping the clothes Xena herself was wearing and then dressing herself in them, forcing the furious Xena to flee in shame.