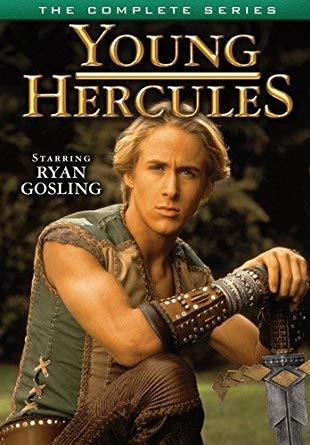 In an age of light and darkness, Zeus, king of the gods, rules the universe. He had a son: young Hercules! Half-god, half-man, young Hercules longs to find his place in the world, the father he's never known, and what it means to be a hero. Before the man became legend, before the legend became myth came the greatest story of all! Young Hercules!
Advertisement:

A spin-off/prequel series of Hercules: The Legendary Journeys about Hercules, Iolaus, and Jason's teenage adventures. It began with a pilot movie, naturally released separately as Young Hercules: The Movie, followed by a full series that ran for one season in 1998-1999 on Fox Kids, airing 50 episodes.

The pilot movie starred Ian Bohen as the titular Hercules. However, following Bohen's decision not to move to New Zealand where principal photography occurred, he was replaced by Ryan Gosling, with Dean O'Gorman as Iolaus and Chris Conrad as Jason. Executive Producer Rob Tapert co-created the show with Andrew Dettmann and Daniel Truly. Another one of the executive producers was Sam Raimi.

In 2015, Shout! Factory released the series on DVD.

And later
Jason: Oh no it's Ares! (cringing badly)