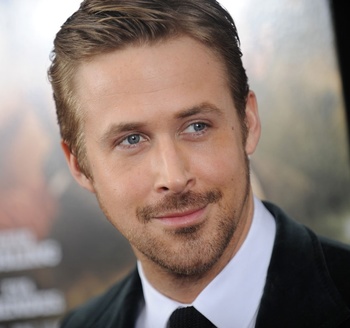 On the lookout for cereal to avoid eating.

"All my characters are me. I'm not a good enough actor to become a character. I hear about actors who become the role and I think 'I wonder what that feels like.' Because for me, they're all me."
Advertisement:

Ryan Thomas Gosling (born November 12, 1980) is a Canadian actor who got his start as a Mouseketeer on The Mickey Mouse Club in the early 90's before doing several other TV shows. His first major role was the Nicholas Sparks romantic 2004 film The Notebook. It established him as a heartthrob, and over the next few years he drew critical acclaim for his turns as the lead characters in both the offbeat comedy Lars and the Real Girl and the inner-city drama Half Nelson (which received him an Academy Award nomination).

Since then, he has established himself firmly as a powerful dramatic actor, with special mention going to his nameless lead character in the action drama Drive (2011). Also well-known on the Internet for the Feminist Ryan Gosling meme, where someone takes a picture of the man and adds (often pseudo-) feminist text that begins with "Hey girl." note  it stemmed from a statement he made protesting

Blue Valentine's inital NC-17 rating because of a scene of oral sex While he's avoided saying anything too specific about the meme, he's allowed the book of it to use his likeness, and honestly his silence is a bit telling. And, according to millions of fans, he's Batman.

He has lived with Cuban-American actress Eva Mendes since 2011, and they have two daughters.