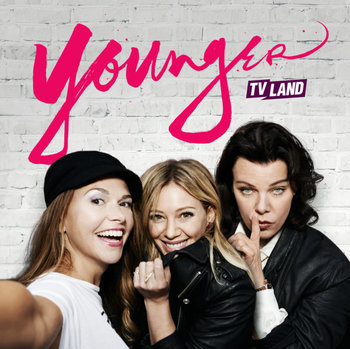 It's only a lie if you get caught.
Advertisement:

Younger is a romantic dramedy series on TV Land, based on the Pamela Redmond Satran novel of the same name. Darren Star (Sex and the City) created and executive produces it.

After being mistaken for younger than she really is, 40-year old single mother Liza Miller (Sutton Foster) decides to take the chance to reboot her career and personal life as a 26-year old.

With the help of her best friend Maggie (Debi Mazar), a sharp-tongued lesbian artist, Liza moves to Brooklyn and sets up an entirely new identity, even landing herself a job as an assistant at a publishing house. She also strikes up a flirtation with her neighbor Josh (Nico Tortorella), a 26-year-old tattoo artist who thinks they're the same age. Hilary Duff, Miriam Shor, Peter Hermann, and Charles Michael Davis also star.

Younger premiered in March 2015 and became a surprise hit for TV Land, with its viewership figures rising each successive season. A seventh and final season is set to air on Paramount+ in 2021, while a spinoff based around Duff's character, Kelsey, was reported to be in development as of October 2020, however in June of 2021, Darren Star stated that the spin-off was off the table and not moving forward.