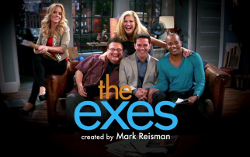 Divorce attorney Holly (Kristen Johnston) introduces her client, Stuart (David Alan Basche), to his new roommates: two other divorced men who share an apartment that Holly owns. At first Phil (Donald Faison) and Haskell (Wayne Knight) have reservations about Stuart moving in, but Holly is right across the hall to help when things start to go downhill.

This series has the examples of: