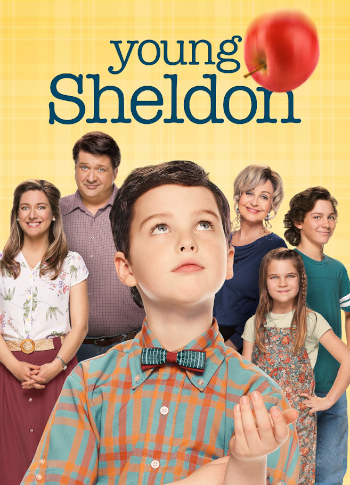 Mary: You understand that some people are gonna be intimidated by you 'cause of how smart you are?
Sheldon: Or maybe they'll recognize my intellect and make me their leader.
Advertisement:

Young Sheldon is a sitcom created by Chuck Lorre and Steven Molaro. The series is a spin-off prequel to The Big Bang Theory and follows the character Sheldon Cooper at the age of 9, living with his family in East Texas and going to high school. Iain Armitage stars as young Sheldon, alongside Zoe Perry as Sheldon's mother Mary Cooper, Lance Barber as Sheldon's father George Cooper, Sr., Montana Jordan as Sheldon's older brother George "Georgie" Cooper, Jr., Raegan Revord as Sheldon's twin sister Missy Cooper and Annie Potts as Sheldon's maternal grandmother Connie Tucker. Jim Parsons, who portrays an adult Sheldon Cooper on The Big Bang Theory, narrates the series and serves as an executive producer.

The main premise of the show is about Sheldon Cooper working to enhance humanity's understanding of science, particularly physics fields such as general theory of relativity and quantum chromodynamics, so that by the time he becomes an adult he'll be a renowned physicist who reaches the same levels of fame as his idols Albert Einstein, Clark Maxwell, Paul Dirac and Stephen Hawking. His love for science and pursuit to prove that our universe is increasingly expanding often conflicts with his mother's devout religious beliefs, his father not making enough money to fund Sheldon's projects or endeavors, his siblings' mockery and his parents' time-poor schedule having to raise three children.

Seasons 11 and 12, the final two seasons of The Big Bang Theory, started bringing in (or reviving, in Mary and Missy's case) older versions of characters on this show as a means of getting more in touch with this show including George Jr. who never appeared in TBBT before. This show then did the reverse for the Season 2 finale, by bringing in children who would grow up to be Leonard, Penny, Howard, Raj, Bernadette and Amy.

♫ Nobody else is stronger than I am
Yesterday I moved a mountain
I bet I could be your hero
I am a mighty little man! ♫
Feedback

On what was supposed to be her day off, Mary secretly watches a very dirty movie, before being caught by Georgie.

On what was supposed to be her day off, Mary secretly watches a very dirty movie, before being caught by Georgie.